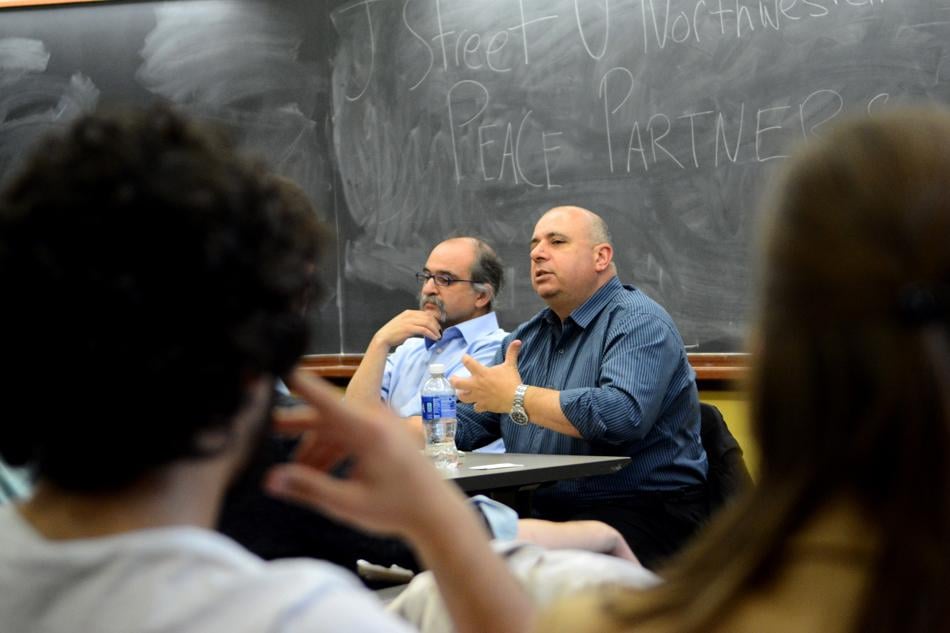 Ghaith al-Omari looks on as Ori Nir speaks at the Peace Partners discussion Tuesday night. The discussion, hosted by J Street U Northwestern, a group advocating for a two-state solution to the Israeli-Palestinian conflict, featured individuals with perspectives from both Israeli and Palestinian backgrounds.

J Street U Northwestern, a student group which promotes a two-state solution in the Middle East, hosted an event on Tuesday focused on how to effectively discuss the conflict by allowing both sides to voice their opinions.

About 100 students, faculty and community members attended the discussion, titled “Peace Partners: Israeli and Palestinian Perspectives,” which featured Ori Nir, a former Israeli journalist and current national spokesman for Americans for Peace Now, and Ghaith al-Omari, an executive director of the American Task Force on Palestine. The two represented the Israeli and Palestinian perspectives on the conflict, respectively.

“You can’t deal with this conflict by denying the other,” al-Omari said. “You will never be able to understand it if you can’t accept the other view and claim. The only way we can move forward is through partnerships.”

Nir and al-Omari shared their personal experiences, both in youth and adulthood, and talked about how they shaped their views on the conflict. Nir grew up in Jerusalem. He recalled a day when he was covering the conflict and multiple civilians died. During the midst of the clash, a young boy approached him crying, thinking Nir was his father.

“It was a realization that we were dealing with real people, with real suffering,” Nir said. “It may seem obvious, but it really shaped my attitude toward the conflict and who I am.”

Nir said he feels many Israelis have ceased to care about the conflict, not because they are heartless, but because they have endured so much violence and have come to see it as normal. He said the only way for the conflict to be solved is for both Israelis and Palestinians to step away from the numbers and get involved.

Al-Omari shared a similar view, saying that until he traveled to the West Bank, a territory that shares a border with Israel, he believed the accepted Palestinian belief that Israelis were at fault for the conflict. He then went to Palestine as a human rights lawyer on a conflict negotiation team and spent a great deal of time with Israelis.

“It became obvious as time progressed that this is a conflict about two people who have a very legitimate claim and narrative,” al-Omari said. “Although I will never accept the Israeli narrative, it is valid.”

Weinberg junior Josh Boxerman, the co-founder of J Street U NU, said the event was based around the organization’s slogan: “Pro-Israel, Pro-Palestine, Pro-Peace.” NU Hillel and the Buffett Center cosponsored the event and the Associated Student Government provided funding.

“We really wanted to show that it’s possible to have a conversation about this issue that’s productive, pragmatic and focused on what could actually help people,” Boxerman said. “We believe that via the two-state solution, you are being pro-Israel, pro-Palestine and pro-peace.”

Al-Omari said ultimately the key to a solution is finding common ground.

“If we both believe in a two-state solution, then we have a common objective and a partnership is natural,” he said. “Usually when I meet someone from the other side, I look at what we have in common. That’s the way we can move something forward.”