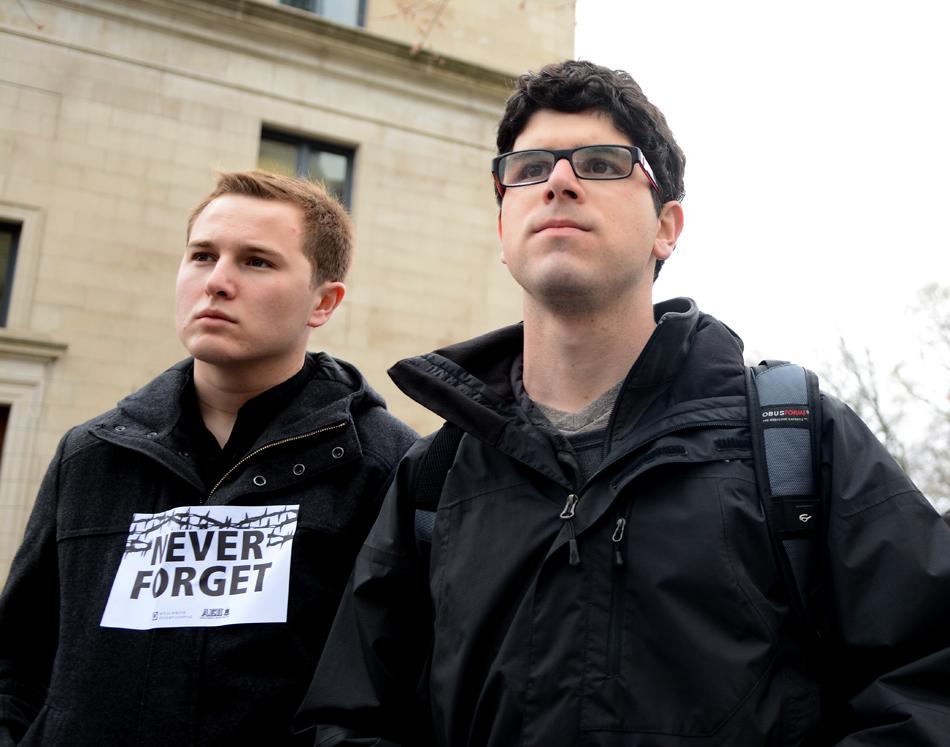 Students look on during a memorial service for victims of the Holocaust at The Rock on Monday afternoon. The service was preceded by a silent walk in the memory of the lives lost during the Holocaust.

Several student groups sponsored events to show respect and solidarity for those affected by the Holocaust. Different speakers gave talks discussing the importance of remembering the tragedy, and a march and memorial service were held at The Rock on Monday afternoon. Students marched from The Rock through campus before returning back to The Rock for the memorial service. During the service, Rabbi Aaron Potek spoke, and several poems were read in commemoration.

Prior to the memorial service, author Marty Brounstein spoke to about 20 individuals about a couple who sacrificed their own lives to save those in danger of being sent to concentration camps during World War II.

Brounstein is known for his book, “Two Among the Righteous Few: A Story of Courage in the Holocaust,” published in 2011. He has spoken to more than 260 audiences to share this story.

Brounstein began his talk by asking members of the audience three questions about whether or not they would be willing to sacrifice their own lives for those who were most in need of their help. He continued his discussion by describing the history of World War II, emphasizing the absolute destruction occurring after Germany initially invaded Poland in 1939.

“When it’s finally over, you’re going to have over 11 million people murdered in the Holocaust,” Brounstein said.

He noted Jews were not the only ones targeted during the war, but disabled individuals and political opponents, among others, were also included “on this list.”

“If you’re on this list during this time period, this 12 year time period, which only gets worse as it moves on, if you’re in this list, in many cases you’re life is not just a nightmare, you’re doomed because you may be captured before you realize what’s happening” he said.

He called this point in time “a climate of hate and indifference,” noting the lack of care people exhibited just furthered the hatred felt toward targeted during wartime.

“It is the most frightening time, many will say, in the world’s history,” he said.

Brounstein continued to describe a group called the L.O., a national organization focused on helping to hide individuals in danger of being sent to concentration camps during the Holocaust. He noted though that the majority of people during that time were not willing to sacrifice their own lives for others.

“There will only be a handful of people throughout the whole continent of Europe, let alone the world, who have the courage and compassion to say ‘wait a minute, maybe I should try to help,’” Brounstein said.

However, two individuals willing to risk their lives for others included Frans and Mien Wijnakker, the main characters of Brounstein’s book. To describe the couple, Brounstein said they were “ordinary people who do extraordinary things.” During the time of the war, the couple saved more than 20 individuals in danger of being exported to concentration camps, hiding them in their house along with four children of their own.

At the end of the event, Brounstein revealed he had a more personal connection to the couple. The Wijnakkers had taken in another couple in an effort to save their lives, who during the time of the Holocaust, became pregnant, and gave birth to the woman who Brounstein married. Brounstien said he traveled with his wife, who also spoke briefly at the end of the event, to spread his message and his story and had since been back to the house in the Netherlands where his wife was born and protected during the Holocaust.

After the talk, a short Q-and-A session was held. Audience members asked questions varying from how many Christian households often took in Jews and requested more detail about the L.O. network. Brounstein noted throughout the war, the network was not always steady, and many individuals were unwilling to continue their commitment as the war worsened.

SESP sophomore Jacqueline Soria said she thought it was important for individuals continue to remember the Holocaust, noting she had a more personal connection to this time in history as her grandmother was in the Holocaust.

“I think this event was really cool because the way it was presented, it was framed as something from the interfaith perspective,” she said. “I think going to events like this are really important for preserving and honoring memories of victims of the Holocaust.”