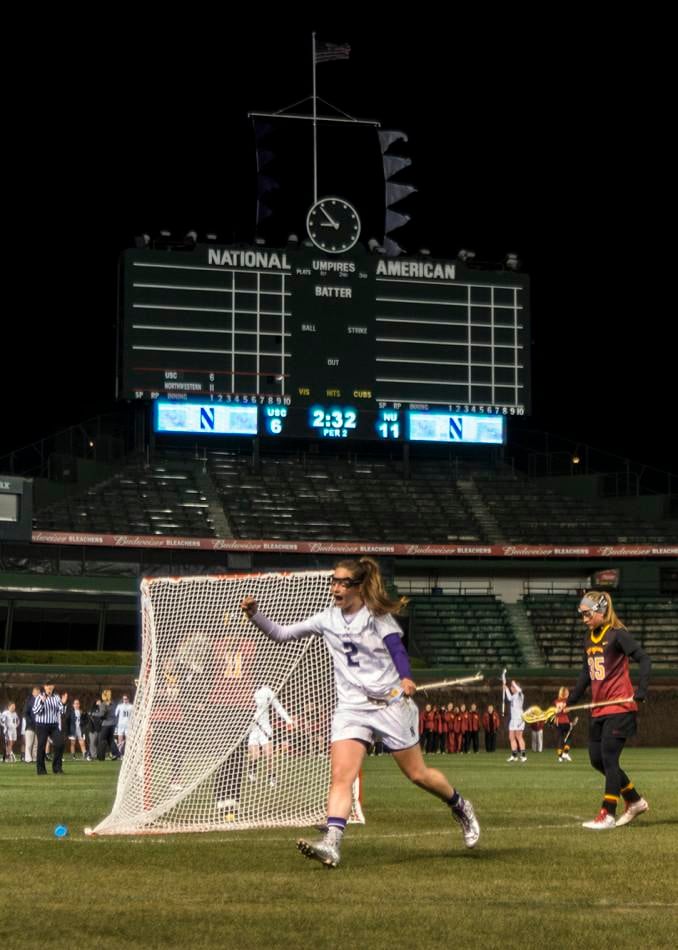 Draw control specialist Alyssa Leonard cheers after Northwestern's final goal in its win against Southern California. The senior kicked off her last regular-season game's second half with a behind-the-back goal.

After three games at three nationally significant stadiums — Cowboys Stadium in 2011, Gillette Stadium in 2012, and the Los Angeles Coliseum in 2013 — Northwestern returned home to Chicago on Saturday to conquer the last corner of the nation at Wrigley Field.

With 5,145 fans in attendance, the Wildcats neatly handled the visiting Southern California program under the lights of the Friendly Confines, 12-7.

The significance of the landmark Chicago location wasn’t lost on coach Kelly Amonte Hiller, who largely pioneered the sport’s expansion when she restarted the varsity program 12 years ago.

“I’m a Chicago sports fan, ever since my brother was the captain of the Blackhawks,” Amonte Hiller said. “I make my living here in Chicago and it’s only right that I should be a fan of these teams. … It’s great for Chicago sports to have so many great teams. We feel very connected to that, and hopefully people continue to follow us and consider us in that same light.”

Goalkeeper Bridget Bianco spoke afterward about the experience of playing at the 100-year-old park.

“I like how the stadium is unique,” the junior said. “You come to Wrigley and it has that old-time feel and that history and you just feel like you’re a part of that history since you got to play on that field.”

There was no question as to whether the Cats felt comfortable in their temporary home away from home, as draw control specialist Alyssa Leonard proved coming out of halftime.

The senior kick-started the second half of Saturday’s game with a showy, behind-the-back goal. The play was something the controlled, reserved Amonte Hiller might usually dislike and exactly what could be expected from a graduating senior playing the last regular-season game of her career in a historic ballpark.

“That I think just showed that we really wanted to come out and set the tone in the second half,” senior Kate Macdonald said. “We wanted to come out like we were playing from behind and just work together and really get the ball going. I think there were like three passes before that shot, and it just really came together.”

Aside from Mupo and a goal from Jess Carroll, the fruit of the junior’s five shots, seniors made up the rest of the score sheet.

Senior Kat DeRonda chipped in 2 goals, and her classmates Kelly Rich and Christy Turner each notched 1.

Carroll and Mupo, as they did against Florida on April 19, showed promise as leaders heading into the post-season.

The Cats now turn their focus to the ALC Tournament, which the team will host at Lakeside Field starting May 1. With three losses within the conference, Amonte Hiller said her team is looking forward to making its mark in the last tournament before the conference disbands.

“The players are not pleased with where we’re at in the ALC,” Amonte Hiller said. “And we’ve got something to prove.”

Perhaps the Cats’ purpose this year is what makes NU fit in as a Chicago sports team. Because if there’s one thing Wrigley Field has done in its 100 years, it has hosted many teams ready to prove themselves against expectations.