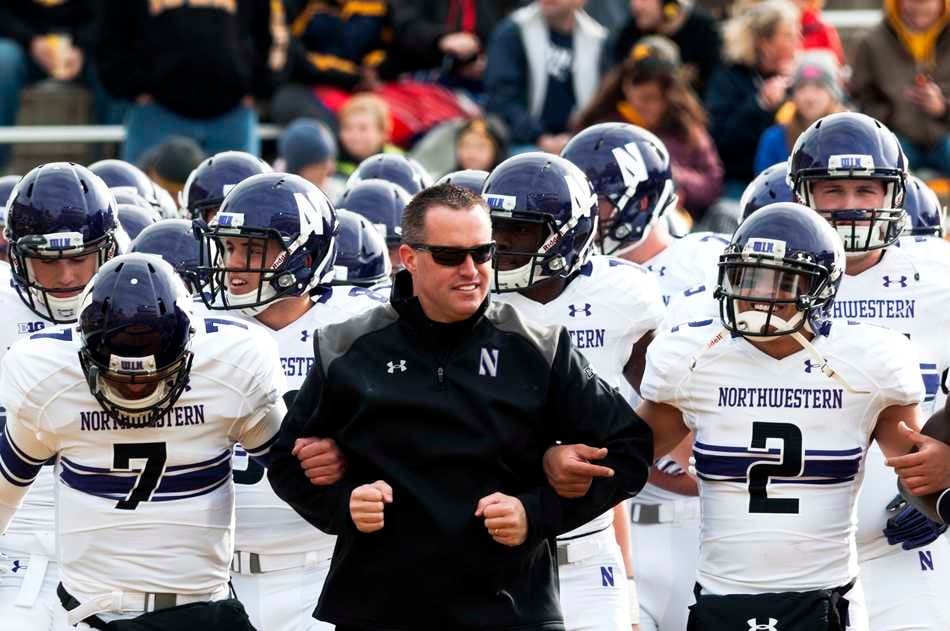 On the same side for four years, coach Pat Fitzgerald and Kain Colter have opposing interests in Friday morning’s union election. Colter is a leader of the unionization movement, whereas Fitzgerald says he does not support the union.

For all the information leading up to Friday’s vote, read our full coverage of Northwestern’s unionization efforts here. Look for updates on Friday’s vote throughout the weekend.

On Friday morning, Northwestern scholarship football players will officially vote on whether to form a union.

The election comes a month after the Chicago regional director of the National Labor Relations Board ruled NU players are University employees and can therefore unionize.

Here’s everything you need to know in advance of the vote.

Where will the election take place?

The election will be held in McGaw Hall on Friday morning.

What are the rules?

Scholarship players will vote whether or not to unionize, with a simple majority determining the outcome.

The NLRB — not NU or the College Athletes Players Association — will officiate the election, which will be held by secret ballot.

The school is not allowed to discuss the issue with players in the final 24 hours before the vote.

Because he sees a need for reform in college athletics and considers this an opportunity to make that happen.

First of all, the union could directly improve life for NU players. It would negotiate to legally secure rights such as guaranteed scholarships and medical benefits that extend after graduation.

And though CAPA would negotiate with NU — not the NCAA — any success would force players at other private schools to consider unionization and potentially spark a larger movement. Eventually, an avalanche of demand for change at a school level could pressure the NCAA into meaningful change.

NU would be a test case for unionization as a means of players rights advocacy.

Because he doesn’t want NU’s interests (or his own) to get in the way of greater change.

Most players (coaches, alumni and other people with basic critical thinking skills) seem to think some degree of change, small or large, needs to be enacted at the NCAA level. But CAPA would only theoretically make that happen.

What it would definitely do is make life a little more difficult for an NU program players express unbridled affection for.

CAPA could potentially drive a wedge between the players and the University, including its beloved coach, Pat Fitzgerald. They wonder what a third party could negotiate for them that they can’t take directly to administration themselves.

Meanwhile, the union would likely not be formed for some time, meaning current players would reap few, if any, benefits from its negotiations.

There are also some key unknowns. If players are employees, are their scholarships taxable income? How would this influence non-revenue sports at NU in the long-term?

Upsetting the status quo may be too large of a risk to endure for the sake of advocacy.

How will the vote turn out?

No one knows for sure.

Players who have spoken publically on the issue have mostly voiced opposition to the union, but it would make sense if a silent majority exists. Players could be afraid of voicing their support too loud for fear of earning Fitzgerald’s disapproval.

Still, hearing guys like Collin Ellis and Trevor Siemian explain why they (and others, they say) plan to vote “no,” it begins to seem that’s how the team is leaning.

When will the public know the results?

Assuming the NLRB chooses to hear NU’s appeal on last month’s ruling, it could be a while before the results of the election come out.

The votes will be impounded until the appeal is ruled on, which could be many months.

How does the union vote affect the NLRB process?

The NLRB will rule on the employment status of the players regardless without knowing how the players have voted. If the board upholds the ruling, the players will legally be employees with or without a union, which could serve as an important precedent for future cases.

What happens if the players vote for the union?

They will be unionized as CAPA under the leadership of Ramogi Huma.

NU will presumably refuse to negotiate with the new union, in which case federal courts will become involved. Regardless, it will be a while before any actual change occurs.

What will happen if the players vote against the union?

The fight for college athletes’ rights pretty much leaves NU.

The players’ employee status would linger idly, unless a future team initiates a vote, and CAPA leaders would move on to their next project, wherever and whatever that might be.

Clarification: An earlier version of this article incorrectly implied the location of Welsh-Ryan Arena is next to McGaw Hall. The article has been updated to reflect the change.