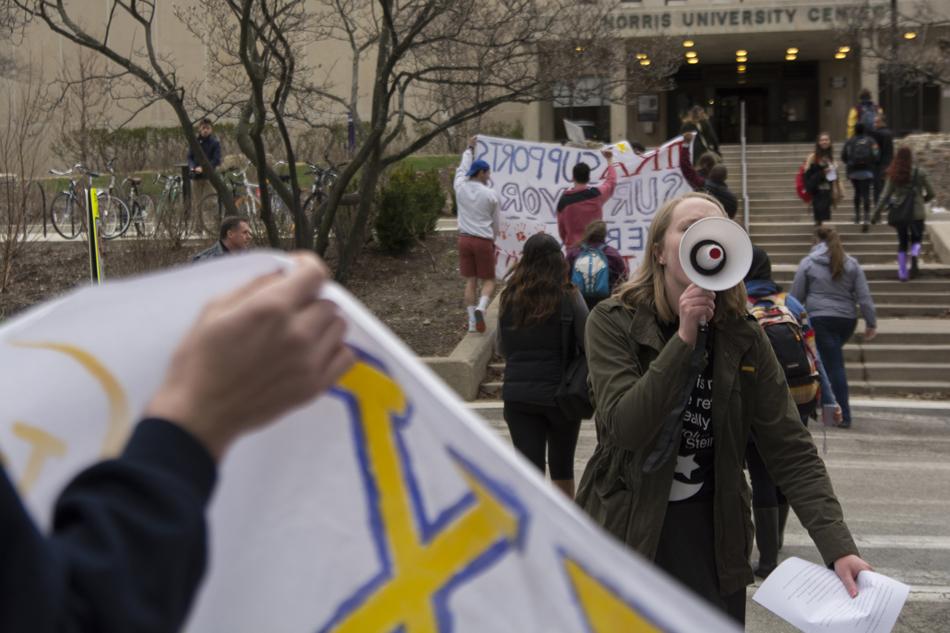 Weinberg junior Lizz Bohl leads a chant Thursday evening at the Take Back the Night March. Students marched around campus and back to Norris University Center to show support for survivors of sexual violence.

About 100 students, faculty and community members marched down Sheridan Road on Thursday as part of the Take Back the Night March, an annual event focused on increasing awareness about sexual violence.

The march, sponsored by the Northwestern University College Feminists, was the main event of Sexual Assault Awareness Week.

“Raising sexual violence awareness is especially important on college campuses because rape and rape culture are so prevalent,” said Communication sophomore Sanjana Chetia, a member of the publicity team for Take Back the Night and a co-president of College Feminists.

Throughout the week, there has been programming for a variety of different audiences. Chetia said some events focused on providing support for victims of sexual violence and giving advice on how to support those who have a friend or a family member affected by sexual violence.

The march started at The Rock and continued down Sheridan Road. Before the march began, students heard from the Take Back the Night co-chairs, Weinberg juniors Haley Pilgrim and Lizz Bohl, as well as Megan Blomquist, director of education and training at the Chicago organization Rape Victim Advocates. Blomquist spoke briefly on her own experiences with sexual assault and offered words of encouragement to survivors and supporters.

“I realized that it wasn’t just me,” Blomquist said. “It wasn’t just my friends, my family that were impacted. It was everyone. It’s the society we live in that allows rape to happen.”

During the march, different student groups carried banners with messages of support for survivors and victims of sexual violence. McCormick sophomore Evan Gray and Medill sophomore Anthony Settipani both participated in the march with their fraternity, Phi Mu Alpha. Both students said they took part in the march because they felt it was a very powerful way to show support for those impacted by sexual violence.

“I think it’s nice to get a lot of people in the same place supporting something together, especially when it’s something that in certain circles is very well known, but in other places not well known or discussed,” Settipani said.

Gray said condolences for sexual violence can sometimes be hard to articulate, but the march was a good way to show their solidarity with survivors.

“Oftentimes you want to do something, but it’s hard to find ways to do so,” Gray said. “I think the march is very effective and very visible to the community.”

A survivor speak-out immediately followed the march at the Dittmar Gallery in Norris University Center, where survivors of sexual violence were able to tell stories in a confidential space.

“It’s a safe space for people to share their stories,” Bohl said. “It’s just a room that’s so full of love and support, and it’s just invaluable and so powerful every time.”

Laura Stuart, sexual health education and violence prevention coordinator at the Center for Awareness, Response and Education, said her main goal is to create a campus climate where sexual violence isn’t tolerated. Stuart said the most important aspect of Take Back the Night is that it “lets survivors know that they’re not alone.”

“A lot of people don’t disclose or want to take any kind of action because they are afraid that people aren’t going to believe them,” Stuart said. “Public events like this allow people to realize they are not alone.”

Correction: An earlier version of this article misstated Megan Blomquist’s title due to an editing error. The Daily regrets the error.