Softball: Wildcats to take on Buckeyes in final Big Ten series of the season 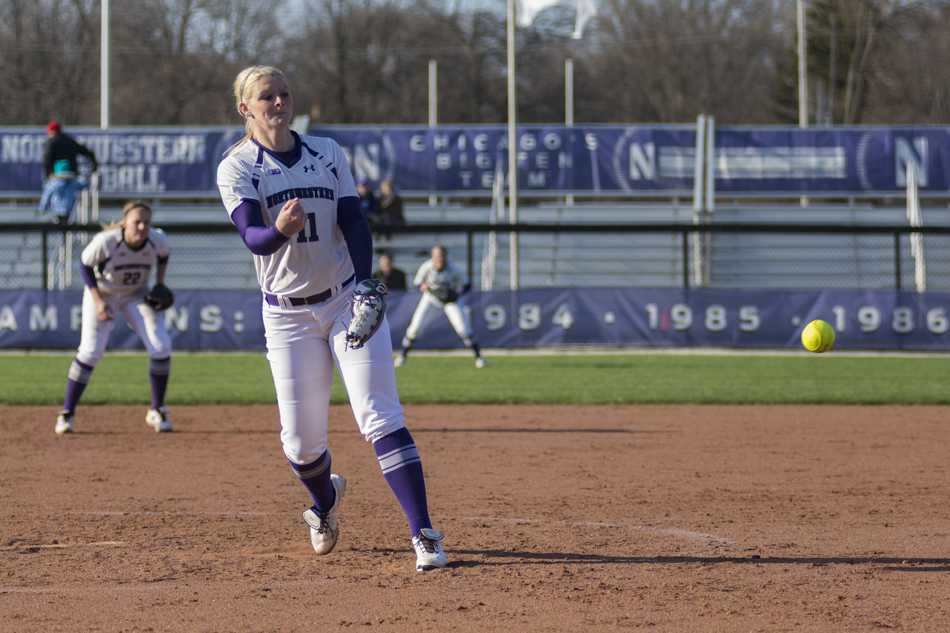 Sophomore pitcher Kristen Wood has been a workhorse for Northwestern this season. Wood has appeared in 27 of the Wildcats’ 40 games, making 21 starts and hurling 137.1 innings.

No. 25 Northwestern will make its final trip of the season to a Big Ten ballpark this weekend to take on Ohio State. It will be the team’s first visit to Columbus since 2010.

The Wildcats (29-11, 11-6 Big Ten) will look to continue their stellar play of late — the team has won six in a row since losing two straight to then-No. 14 Minnesota.

The Buckeyes (22-23, 8-9) are also trying to stay hot. They are coming off of a doubleheader sweep of conference opponent Penn State on Wednesday.

NU is led on offense by senior third baseman Marisa Bast. The reigning Big Ten Player of the Week picked up six RBIs against Illinois, bringing her season total to 45.

NU’s pitching duo of sophomore Kristen Wood and freshman Nicole Bond is also firing on all cylinders. The Cats’ opponents have scored only 7 runs in the last six games, with three of those games being shutouts.

Both pitchers have been clutch in key situations, stranding runners and keeping the damage to a minimum.

“I get nervous, but it’s good for me because it gets me more fired up,” Wood said after Sunday’s win over Indiana, in which she held a tie game for the last three innings. “I know that my team is there to back me up.”

The Buckeyes will likely feature junior Olivia O’Reilly and freshman Shelby Hursh on the mound. O’Reilly has pitched the most for the team this year, holding a 10-8 record with a 3.03 ERA. Hursh is coming off a great outing in which she pitched her third complete game of the season, allowing no runs on three hits with nine strikeouts.

The Buckeyes will be honoring eight seniors as a part of Senior Weekend.

NU has only three series left before hosting the Big Ten Tournament from May 8 to 10. After facing Ohio State, the team will visit DePaul on April 30 before hosting its own Senior Weekend against Michigan State.