The Sideline: Claire Pollard perfects winning ways, on and off the court 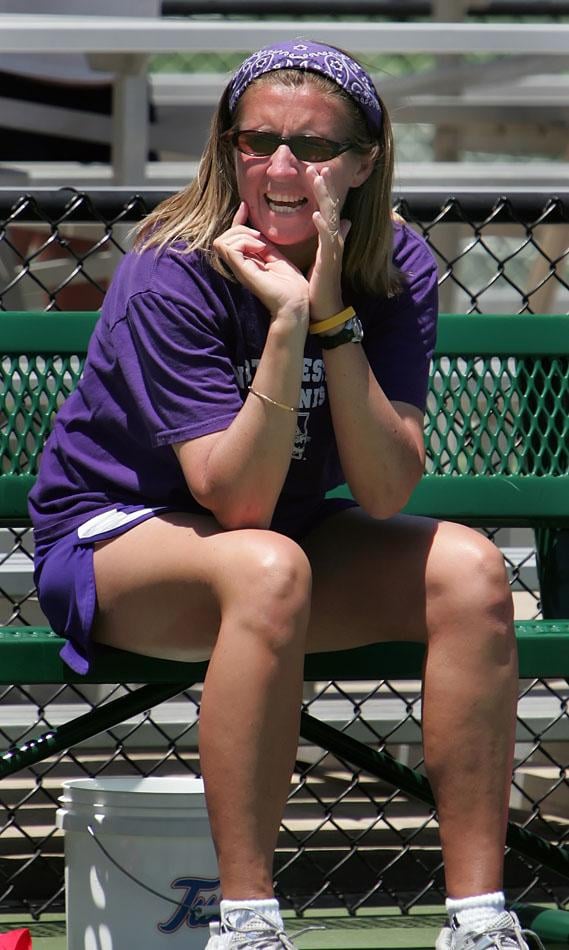 Claire Pollard has made her mark at Northwestern. The women’s tennis head coach has led her team to a Big Ten regular season or tournament title 14 of the last 15 years.

Northwestern is a women’s tennis powerhouse. It’s almost hard for the Wildcats to lose.

NU holds the second-longest Big Ten Championship record in conference history, with 11 consecutive championships from 1999 to 2009. The team won 81 straight dual matches against Big Ten opponents from 2004 to 2010 and has claimed the Big Ten title 14 of the last 15 years. This weekend, that could improve to 15 of 16. Claire Pollard has been in Evanston for 16 years.

Tennis has been in Pollard’s blood since her beginnings in Surrey, England. Both of her parents played tennis in the London area, so “weekends were often at the tennis club,” Pollard said. She was immersed in the tennis lifestyle starting at eight years old. Initially, the young Pollard loved soccer, “or football, as we should call it,” but because lower-level soccer leagues for girls did not really exist during her childhood, she scrapped the idea of playing soccer and began to take the racket seriously at age 12.

“I entered a few tournaments,” Pollard said. “I did OK and seemed to really enjoy it. (While at the tennis club) I might as well have played rather than sitting there doing nothing. With tennis, there were opportunities to play throughout the summer and back then it was a very different commitment than these girls (the NU team) make, I only played twice a week growing up.”

Pollard and associate head coach Jackie Holden knew of each other back in the United Kingdom, but Pollard played in tournaments in the southern part of the country while Holden dominated the northern part.

“Our paths often crossed when we played county events,” Holden said. “We didn’t play an awful lot, but we knew each other through junior tennis in England. (Pollard) was very well known for her doubles in particular,” Holden said. “I think she won our nationals in doubles so she was always known as a doubles player.”

The pair attended Mississippi State together and dominated the doubles game at the collegiate level, winning back-to-back Southeastern Conference championships. After different circumstances kept them from substantial success at the NCAA Tournament their first three years, the duo finally won the 1989 NCAA doubles championship in their final season.

The tandem’s style became a deadly combination of power and prowess. Holden had more of a powerful stroke while Pollard “was a very feel person, great hands,” Holden said. Pollard was also the calmer of the two players.

Becoming collegiate champions did not have the most profound effect on either player’s lives, Holden said. Their paths had been set, Holden would return to England, continue playing for a bit and work for Adidas. Pollard would become the graduate assistant coach for the Bulldogs. The two finally came back together in 2008 when then-assistant coach David Mullins left the NU program.

“Claire’s obviously been here a very long time,” Holden said. “We complement each other. I do what she asks me to do, what’s required of me. We kind of just know what needs to be done. At the end of the day, I’m there to support her and how she wants to run the program. That’s a great thing about Claire: She’s very open to changes and other people’s opinions. She’s always looking for new things to implement, new ideas.”

A tradition of excellence

After her college days, Pollard participated in Wimbledon and the U.S. Open Championships in 1989. For many of the next summers, she returned to Wilton Tennis Club to hone her skills as a tennis master and compete in the Wilton Summer Tournament. She has won 13 of those tournaments.

“I certainly didn’t compete to win,” she said. “I competed because it’s kind of just what you did. You kind of wanted to test yourself. I really like figuring out how to beat someone. That’s really fun for me as a player, that’s really fun for me as a coach. That’s probably the aspect of coaching that I enjoy the most, just sitting back and trying to help someone figure it out.”

A few years out of college, Pollard became the head coach for both men’s and women’s tennis at Lamar University in Texas. Between those teams, she accrued an overall record of 110-100 from 1994-98. After the 1998 season, she arrived at NU to establish the women’s tennis program as a national powerhouse that routinely ranks in the top 20 nationally. During her tenure with the Cats, Pollard boasts a 349-85 record. Her best season was 2008, when NU went 29-2 and finished fifth in the NCAA Tournament.

Pollard regularly brings her three children to practice and matches. Madeline, Finn and Gemma are all still under 10 but love the Wildcat family. That love is reciprocated by every player on the team. The team plays with Pollard’s children and has even celebrated birthdays with them.

“We love all of them equally,” freshman Maddie Lipp said, with a slight hint of favoritism towards Gemma. “This past weekend was really fun with them. We watched ‘Frozen’ six times because they wanted to.”

But Pollard’s family is not all biological. The whole team is tightly knit enough to be considered kin.

“I personally was extremely nervous coming in,” said senior Veronica Corning, who transferred from Boston College after her freshman year. “My coach was talking to her before and giving her a bunch of expectations that I thought I had to fulfill, so coming was stressful. I wasn’t playing my greatest too, so I was going through a rough time but I had some meetings with Claire and Jackie personally and they really calmed me down telling me to take one step at a time, just let it come. It’s going to be nerve-racking at first but just adjust.”

“I think Claire’s really able to establish the culture of the program,” Leung said. “Once I came here, she made it clear what this is about, what I’m here for and what she expects from me. So it’s easy because she gives us clear directions as to what you should do and what roles you play on the team.”

Not just a coach, but a mentor

One goal Pollard has for her team is for each player to grow more as a person than anything else. She has found a way to make sure her players balance NU’s rigorous academics with her own rigorous coaching style on the court.

“As a coach, you have to try and understand the challenges they’re going through, otherwise there is a disconnect between you and the players,” Pollard said. “First and foremost, I try to install a love of the game and love of pushing yourself and achieving the best that you can be. I try to treat everyone the same, I value the ninth player on this team as much as I value Veronica (Corning), who’s playing number one.

“We (at Northwestern) talk about the student-athlete and we deliver it. You have to be a student here; you can’t just be an athlete here. If you’re going to play for us, we’re going to push you as hard athletically as you are academically.”

After being around the coach for so long and watching her coaching style, it’s no surprise that she truly cares for and values all of her players, said senior Belinda Niu. Each player brings a new set of challenges to the table, and Pollard adapts her style according to each person’s need, she said.

“I like to think (the players) know I genuinely care about them first and foremost as people,” Pollard said. “When faced with a decision for them as people versus them as players, it’s very easy for me to choose the decision that is best for them as a person over tennis. I’m definitely demanding, and I’m probably a pain in their rear end a lot of the time. I don’t think you can get to be great without pushing, getting pushed and pushing back.”

If spectators watched Pollard during a match, they would find the 47-year-old standing in the corner of a court just observing her players, not letting her emotions show for better or worse. She has a way of commanding attention without saying a word, the air of confidence around her fills the room no matter the size.

“One of my favorite memories was after we won Big Ten my freshman year,” Niu said. “We were all celebrating together and we looked and saw that Claire was walking away into the distance which was strange. We found out later that it was because she was crying a little bit and wanted to hide it from us. Claire is always just such an outwardly tough coach, that it was nice to see that emotion from her. Of course, we know that she really cares, but that moment really pinpointed that for me.”

Pollard has ushered in an era of dominance for NU’s women’s tennis team. She breeds excellence not by being a tough coach, but by learning about her individual players and bonding with them.