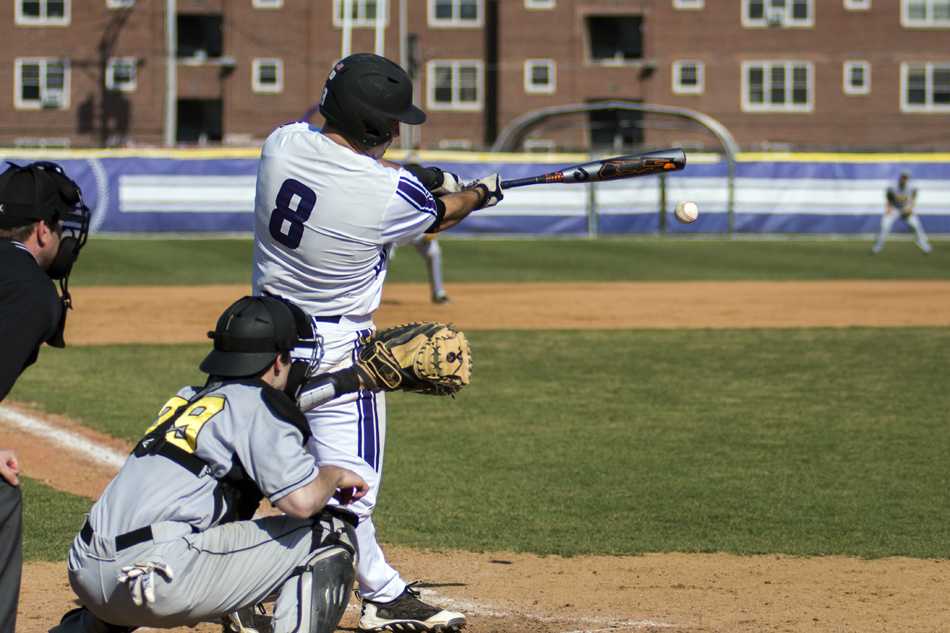 Nick Linne connects on a pitch. The senior third baseman committed two errors in the field but also picked up two hits at the plate.

There was nothing particularly special about Northwestern’s 7-5 win Tuesday over visiting Wheaton College.

The Wildcats (11-25) didn’t hit any home runs or make any diving catches. They didn’t shut out their opponents or score an abundance of runs.

“We just kept coming back, and we kept battling,” coach Paul Stevens said. “I’m pleased with how they kept moving forward.”

Throughout the game, NU rebuffed every Wheaton advance. Each time the Thunder (18-13) scored in the top of an inning, the Cats responded with runs in the bottom half.

Junior shortstop Cody Stevens led the way with four hits — raising his batting average above .300 to .302 — and 2 RBIs.

“It was just a good day,” Cody Stevens said. “When you’re out here playing these mid-weeks, it’s always just good to get out of class and come out and play. … Most of the time I came up with runners on, and then it’s ‘put a good swing on the ball and try to get people in,’ and luckily that’s what happened today.”

Senior Nick Friar started the game on the mound and threw six up-and-down innings, allowing 4 runs (though only 1 earned) on six hits.

In the seventh, Friar was replaced by freshman Joe Hoscheit, making his first collegiate appearance on the mound. Hoscheit became the Cats’ 14th pitcher this season, as Paul Stevens continues to search for reliable arms.

“We wanted to see what Hoscheit had,” Stevens said. “(Pitching coach Tim) Stoddard’s been holding out on me. … It’s gotten to the point where we’re turning over every stone we can.”

Hoscheit ceded only an unearned run in his two innings of work, and senior Jack Quigley closed out the win in the ninth.

Senior third baseman Nick Linne, who recently changed some aspects of his batting stance, went 2-for-4, the only Cats player besides Cody Stevens with a multi-hit game.

“Definitely good to get back on track with my swing a little bit,” Linne said. “I was struggling a little with it this weekend. Nice to get out here and get some hits.”

Linne, who committed two of those errors, refused to blame the miscues on the sometimes erratic field conditions at Rocky Miller Park.

“Some guys use that as an excuse, but I don’t really think you can,” the third baseman said. “This is my fourth year here, so I’m not going to make an excuse for the field doing anything. You’ve just got to really chest the ball up sometimes and do whatever it takes to make a play.”

The win was the Cats’ seventh in 10 games and fourth straight out-of-conference victory.

NU is back in action Wednesday at home against Chicago State, whom the Cats beat twice just last week.

“We’re on a little bit of hot streak right now, which is great,” Linne said. “The morale is super high right now, and we’re all super excited to get to the ball park every day and continue the streak.”