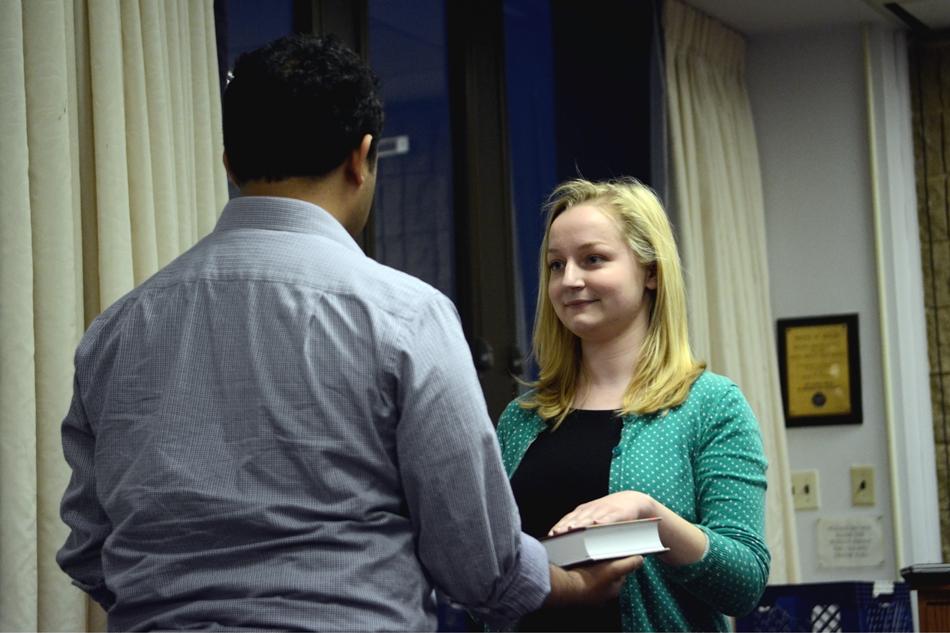 Weinberg juniors Julia Watson and Erik Zorn were sworn in on Wednesday as the new Associated Student Government president and executive vice president.

After being officially sworn out of his position, Ajith made a short speech thanking Senate and encouraging their continued devotion to the University, noting he felt “honored and privileged” to serve as ASG president for the past year.

Gene Sunshine, senior vice president of business and finance, and Jim Hurley, associate vice president of budget, also spoke to Senate members about the University’s budget process. Sunshine, who will be stepping down from his position at the end of the academic year, explained several areas where the University’s annual budget goes, including research, salaries and general University needs. A large part of the annual budget currently goes to academic salaries, with staff and student salaries also being awarded a significant amount of money each year.

Hurley also discussed the future construction updates campus will be seeing over the next several years, including the renovation of Kresge Hall and the development of the ‘Garage,’ a location focused on giving student entrepreneurs a productive space to develop their initiatives.

In response to a question about increasing the amount of money available for transportation services, Sunshine said it is difficult to continually increase funding to satisfy all students and faculty because this has been a common concern over the past several years.

“I’m very sympathetic,” Sunshine said. “We have added and added and added, but I’ll tell you in the time that I’ve been here, there has never been a year where the faculty and/or students haven’t wanted more. And we tried to be as responsive to that as we can be. But it’s very expensive for us, and it bumps up against all the other priorities we have.”

He added that he is open to new ideas and will try to be as accommodating as possible.

Senate also debated specific voting order code revisions in an effort to ensure Senators are held accountable for their votes and to increase transparency within Senator’s decisions. Members of ASG debated over the logistics of engaging in a secret ballot vote and proposed an amendment to the code revision which would eliminate certain bans on whether or not Senators can motion to enact a secret ballot vote. Members of ASG ultimately decided to move the order to formal legislation which will be discussed next week.

Senate discussed allotting money from the Project Pool to JobCat, a website focused on helping NU students find jobs with Evanston residents, in order to fund an ad for the organization in Spoon Magazine.