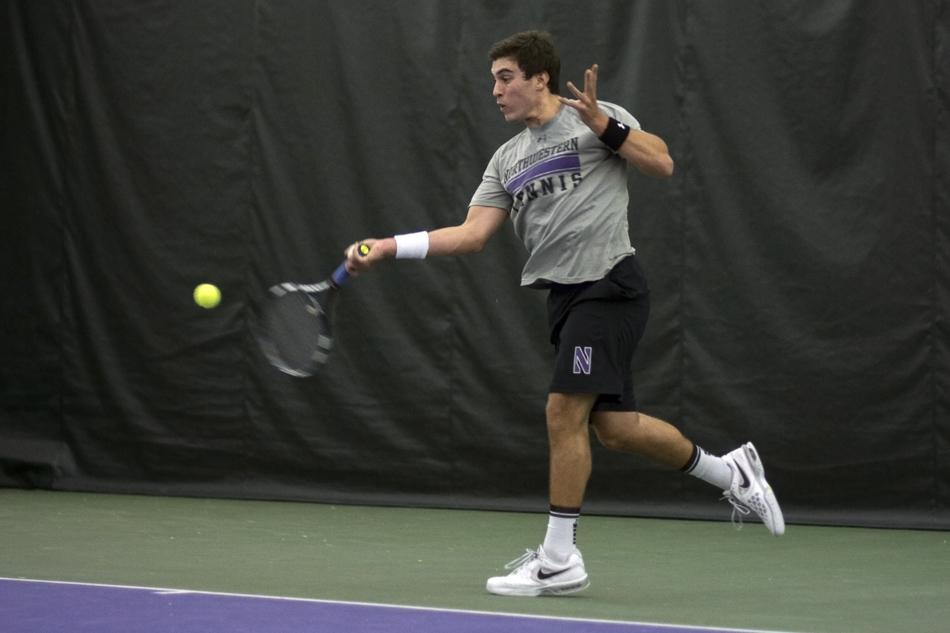 After going three weeks without a singles victory, senior Raleigh Smith came through with a 6-3, 7-5 win over Nebraska’s Dusty Boyer on Friday. Smith retired from his match Sunday with an injury.

“Winning on the road in the Big Ten is not easy,” coach Arvid Swan said. “To win two this weekend was a very good achievement by our team.”

First, Northwestern squared off against the Cornhuskers in Lincoln, Neb., on Friday under sunny skies.

Nebraska jumped out to an early lead after scoring the doubles point. Although sophomore Fedor Baev and freshman Strong Kirchheimer won their matchup, the freshman duo of Konrad Zieba and Sam Shropshire and the 21st-ranked team of senior captain Raleigh Smith and sophomore Mihir Kumar both lost.

Down 1-0, the Cats went on the prowl. NU won four straight singles matches to secure the victory. No. 125 Shropshire continued his recent streak of dominant play with a 6-4, 6-1 win over Marc Herrmann. The freshman thus notched his eighth straight victory in an 11-match unbeaten streak.

This was Smith’s first singles win in three weeks. Previously, he dropped four in a row to Ohio State, Penn State, Michigan and Michigan State.

“I think we all did a really good job,” Pasareanu said. “Obviously it’s not easy playing on the road, but we all competed well, we all played well and we all fought.”

Kumar tacked on one more victory for the Cats, and Zieba took the only loss in singles.

After its fourth straight win, NU packed up its forward momentum and headed to Iowa. Even Mother Nature couldn’t stop this package from arriving, as the Cats prevailed even after weather forced them to play indoors.

This time, Smith and Kumar snagged an easy 8-2 victory in doubles, and although NU fell in the No. 2 doubles, Baev and Kirchheimer extended their unbeaten streak to four matches and clinched the doubles point for the Cats.

Still, the Hawkeyes wouldn’t give up easily, fighting a four-and-a-half-hour battle that included three three-setters.

Shropshire and Kirchheimer again nabbed easy wins, while Zieba and Pasareanu worked hard to serve the Cats to victory.

“I was looking at the scoreboard, knowing it could go either way,” Pasareanu said of the matches. “I knew mine was gonna be a long match, and it felt good to secure the match for us.”

There was one negative development from the match: Smith faced an injury. He played through the pain and won a second set tiebreaker to force a third set but retired once Pasareanu clinched NU the win.

Where does NU go from here?

“We’re gonna keep working on doubles,” Shropshire said. “We’ve put a lot of effort into doubles and I think we’re getting better and better.”