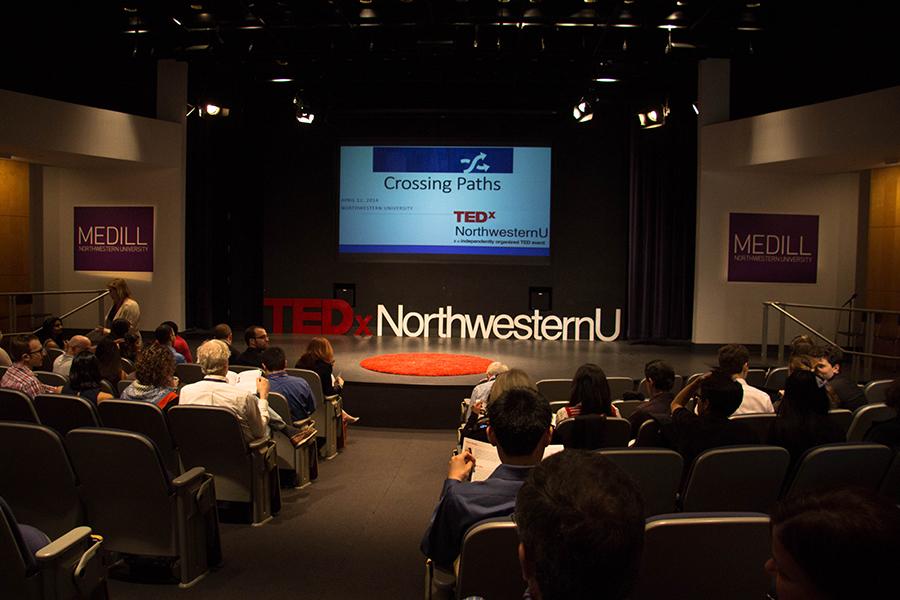 The day was split up into three sections, with each segment featuring several live speeches, student group performances and one official Ted Talk video screening. At the end of each session, the speakers answered questions from the audience.

Co-event organizer and Medill Prof. Michele Weldon said she attempted to gather a wide representation of speakers to appeal to a diverse audience. The talks covered a variety of topics including matchmaking algorithms, the importance of human rights and the future of education.

“Everybody offers something different, but I think everybody was really excellent in a different way, telling different kinds of stories and topics,” she said. “I think it just worked incredibly well.”

She said after working on the event for several months, she had taken all the necessary steps to ensure it was successful and was excited it was running smoothly and appealed to such a diverse audience.

“I think its going far better than I ever even imagined it would,” Weldon said. “I think we worried about absolutely every detail in advance and then nothing went wrong.”

She noted there are thousands of TEDx events across the country.

During the morning segment, psychology Prof. Eli Finkel spoke about creating a matchmaking algorithm. He said with technological innovations and advancements in the field of psychology, creating this type of algorithm may be possible in the future.

Student speaker Jackson Walker spoke about the importance of his Indian culture throughout his life. After being adopted as a baby, Walker, a Weinberg freshman, said he strayed away from his heritage until middle school when he realized how ingrained it was in his life.

During the afternoon session, Aysha Chowdhry (Weinberg ‘04) spoke about the education system in Pakistan, noting 25 million children are not in school.

Hyder Chowdhry, Aysha Chowdhry’s brother, said he attended the event to hear his sister’s speech, emphasizing the significance of the subject to him and his family.

“We’re here to be supportive to our sister,” Hyder Chowdhry said. “She’s talking about education, and obviously that’s important to us and something we hope to see changing.”

The event also included performances from Mee-Ow, Thunk and Purple Haze, among others.

Audience members said they were excited to see these performances interjected with the speeches, noting it gave the whole event a unique touch.

Anne Thiel (McCormick ‘13) said she decided to return to NU for this event because she had never had this experience before and wanted to engage with the speakers.

“I haven’t been back to campus in a while, and I’ve never seen a TEDx or a TED event live,” Thiel said. “I thought it’d be a good opportunity to come back to campus and see what’s going on, and the topics looked interesting.”

Weldon said she and SESP junior Nikita Ramanujam became co-directors of the event after both applying to host it through the TEDx website. Ramanujam said she was inspired to start a TEDx event at NU after seeing it at several universities. She applied in an effort to give students and faculty a forum to share their ideas, she said.

“I was in Boston last summer, and I noticed that every university around me had a TEDx conference. And I was at this great institution, and I was wondering, we have these great ideas, we don’t have a TEDx conference to share these ideas,” Ramanujam said. “I was like, ‘it’s about time we got them to work and share these brilliant ideas that we just heard.’”

The event was sponsored by several different organizations including Panhellenic Association, Robert R. McCormick Foundation and the School of Education and Social Policy.