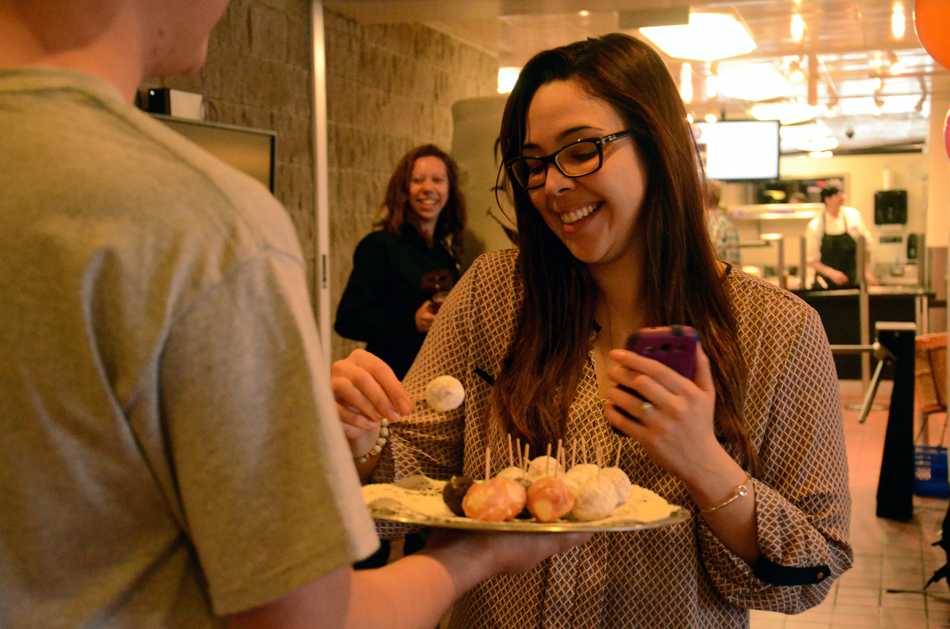 With free reusable coffee mugs and an appearance from a life-size Dunkin’ Donuts character, the franchise celebrated its official opening Thursday on the ground floor of Norris University Center.

During the event, students had the opportunity to take pictures with a student dressed in a Dunkin’ suit and were treated with free munchkins. Administrators and Dunkin’ officials also gave a short presentation at 12:30 p.m., sharing their excitement about the franchise and held an official ribbon-cutting ceremony. The branch has been serving students since its soft opening at the start of Spring Quarter.

Jason Sophian, marketing manager at Sodexo, said Dunkin’ adds to the variety of options in Norris.

“We did a lot of research and took a lot of polls with students and we really felt like Dunkin’ as a brand really meets a need for the campus community,” he said. “We’re just really excited to have another amazing option on campus for students.”

Burgwell Howard, assistant vice president for student engagement, said student input played a large role in bringing Dunkin’ to campus. Howard added that being from the East Coast, he is also a big fan of the chain.

“I think it’s something our students have really wanted for a long time to have other options with variety,” he said. “I think student input has been really valued in this process, so it’s great that were able to do this and to make it happen in a short timeline.”

McCormick sophomore Elise Gluck said she has been looking forward to Dunkin’ coming to Norris.

“I’m pretty excited that it’s here because I like doughnuts and it’s open really late,” she said. “It’s also a lot more affordable than Starbucks.”

Due to its similarities to Starbucks, though, she questioned the decision to bring the chain to Norris.

Sophian, however, said he sees a clear distinction between Dunkin’ and Starbucks.

“The brands are very polarizing,” he said. “There’s Dunkin’ people and there’s Starbucks people. I compare it a lot to Coke and Pepsi where people kind of have their own favorites and they stick to them. We see them more as kind of partners to bring an overall experience to the campus community.”