Bienen: Schools could leave Division I football over union ruling 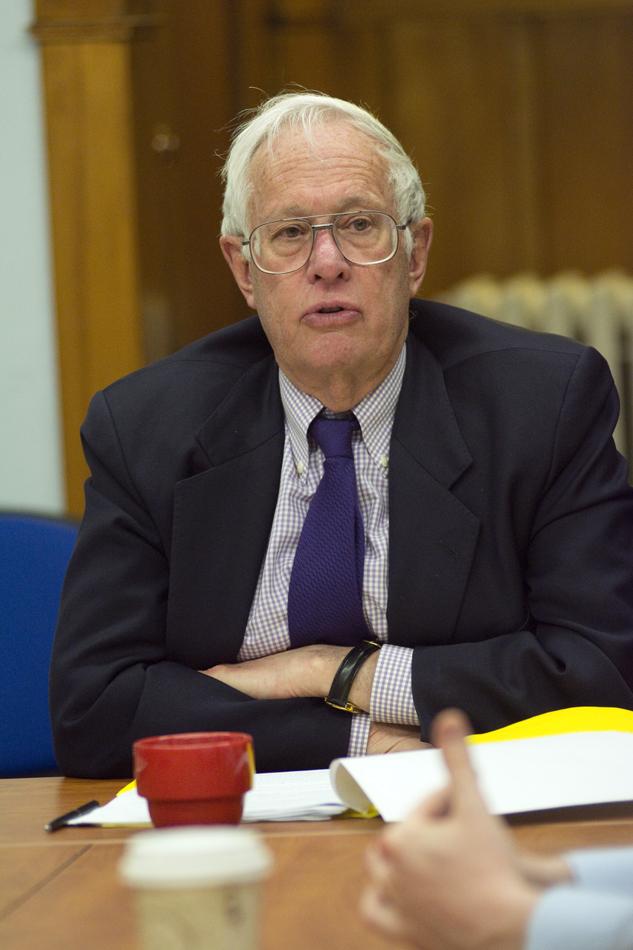 Former University President Henry Bienen gives a talk to the Northwestern University Political Union on Monday night. After the talk, Bienen said schools like NU may have to leave Division I if athletes are allowed to unionize.

Former University President Henry Bienen weighed in Monday night on Northwestern football players’ push to form a union, again raising the possibility of schools like NU leaving Division I football if they have to bargain with their teams.

“It’s not a prediction so much as I think it would be considered,” he told The Daily. “I hope it doesn’t come to that.”

Bienen’s comments echo similar ones he reportedly made prior to the National Labor Relations Board in Chicago ruling on March 26 that NU football players are employees and can create a union. The University plans to appeal the decision, while the football players are scheduled to vote April 25 on whether they want to unionize.

“If we got into the collective bargaining situations, I would not take for granted that the Northwesterns of the world would continue to play Division I sports,” Bienen said in mid-March at the annual conference for the Knight Commission on Intercollegiate Athletics, according to CNN.

On Monday night, Bienen said he expects the issue to be challenged in the courts, where he hopes it will be struck down. If the NLRB ruling is upheld, he predicted it could “open a huge can of worms” because it could apply to any student with an athletic scholarship.

“I don’t think, in the end of the day, it would be affordable or livable in my mind,” Bienen said, noting players have raised “real issues,” especially about medical coverage, but he does not know how they should be handled.

Bienen’s remarks on the NLRB ruling followed a discussion of school reform hosted by the Northwestern University Political Union. Bienen, a member of the Chicago Public Schools Board of Education, discussed whether he believes changes to the district are headed in the right direction.

“Incrementally, it’s happening,” he told about two dozen attendees at The Roberta Buffett Center. “It’s slower than one would like. It’s maybe not as wide-reaching as one would like, but it’s in the right direction.”

Bienen counted a longer school day and the ability to more easily fire underperforming teachers among the most significant reforms to CPS while he has been on the board. He said the district could improve by making room for more students at CPS’ most sought-after schools and preparing more students for post-graduate success.

Like elected and appointed officials from Chicago to Springfield, Bienen warned Illinois’ unfunded pension liabilities loom large over many CPS decisions, and without a solution, the issue could “slash and burn” the district’s budgets beyond recognition.

Bienen also touched on the district’s clashes with the Chicago Teachers Union, first during a 2012 strike and then over the board’s vote to close 50 schools a year later. He said although the union claims to support school reform, he has “never seen it embrace school reform ever.”

However, Bienen added he is not entirely at odds with the union, saying he agrees with CTU president Karen Lewis that a school system cannot solve all problems that plague cities.