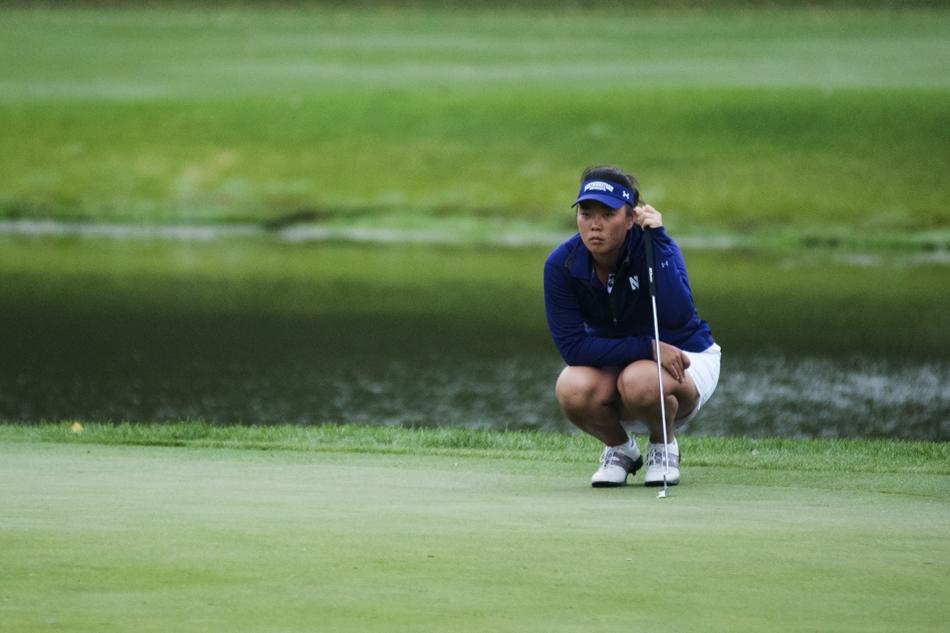 Hana Lee intently looks over a putt. The junior fired a 6-under-par 66 on the way to co-medalist honors in the stroke play portion of the Liz Murphey Collegiate Classic.

For one day, Northwestern put on its most spectacular round of golf all season. And luckily for the Wildcats, it will be the only round that matters in the rankings.

In the single-day 18-hole stroke play portion of the Liz Murphey Collegiate Classic on Friday, NU lapped the field four or five times, posting an 11-under 277 that proved 14 shots better than any of their assorted opponents could muster. The Cats’ total score of 277 shattered the school’s previous one-day scoring record of 284, and set a new low score for 18 holes at the 42-year-old tournament. The 18 holes of stroke play was a standalone event but also served as a qualifier for the match play portion. The Cats’ fantastic play garnered them the No. 1 seed in match play.

In stroke play, NU pummeled a plethora of elite squads. In the on-course blitzkrieg, the No. 23 Cats soundly thumped No. 22 Iowa State, No. 20 Michigan State, No. 10 Alabama, No. 4 Arkansas and No. 1 USC. The Trojans, the defending national champions, had won seven of their nine events coming into the week but lost 17 strokes to NU in 18 holes.

It was the team’s second victory of the season, and if any scar tissue had developed as a result of their poor 14th-place showing at the Bryan National Collegiate just a week ago, it dissipated at warp speed. Coach Emily Fletcher felt that result could be a great wake-up call for her squad. Her prediction proved accurate.

“(That round) was pretty amazing,” Fletcher said. “It was a great effort, and everybody played well. The girls really fought hard and got under par and finished off the round. The last two holes were par-5s and we played them well, in a combined 6 under par. That was huge for us coming in, taking a good round and making it exceptional.”

Ironically, NU’s biggest hindrance of late had been its slow starts.

The University of Georgia Golf Course was kinder to the Cats. Four of the five competitors finished in the top-10. Freshman Kacie Komoto posted a 72, sophomore Elizabeth Szokol put together a 70 and fellow sophomore Kaitlin Park  made six birdies on her way to 69.

Hana Lee stole the show, though. The junior was steady with two birdies and nine pars in her first 11 holes but then made four consecutive birdies and found herself deep in the red. Lee finished with a 6-under 66 to capture co-medalist honors, the first individual victory in her NU career.

Oddly, it wasn’t some convoluted formula that got her to that place. Instead, simplicity was the key.

“Everything was kind of clicking well,” Lee said. “I wasn’t really thinking a lot through the round, it just kind of happened. I wasn’t thinking about what I was shooting.”

Following the stroke-play portion, the Liz Murphey moved on to match play. With the 2015 NCAA Championships including this latter format for the first time, match play is popping up more and more in the women’s game. However, match play results will not count toward team rankings until next season.

Unfortunately for the Cats, the No. 1 seed meant little.

On Saturday, NU lost its opening match to North Carolina State 3-2. The Cats were in good position down the stretch, but the Wolfpack won matches on the 18th hole twice with birdies.

Following a clutch long putt on 17, Kaitlin Park had six feet for birdie on 18 to halve the match, but couldn’t convert.

“That putt was really what could have made our match,” Park said. “I felt really bad. I felt like I let the team down a little. It was a great experience in match play though, and next time I will make that putt.”

Park admitted the loss was a significant letdown and affected the squad in their next match, and it showed when they fell to Auburn 3-0.The Cats did rebound with a Sunday win over Denver, 4-1, but finished 1-2 in match play overall.

Still, the stroke play demolition should boost NU’s ranking — not that the Cats went to the event to pad their national standing.

“The important part was to be able to expose ourselves to match play because that is what our national championship will be starting in 2015,” Fletcher said. “That’s the huge benefit of this tournament, to get the opportunity to get some experience and get some competitive experience with match play.”

For this year, though, stroke play is still the critical juncture. And they know just how much that performance means.

“That win is an important milestone for our team,” Fletcher said. “To lap the field by 14 shots against a really impressive group of teams was huge.”