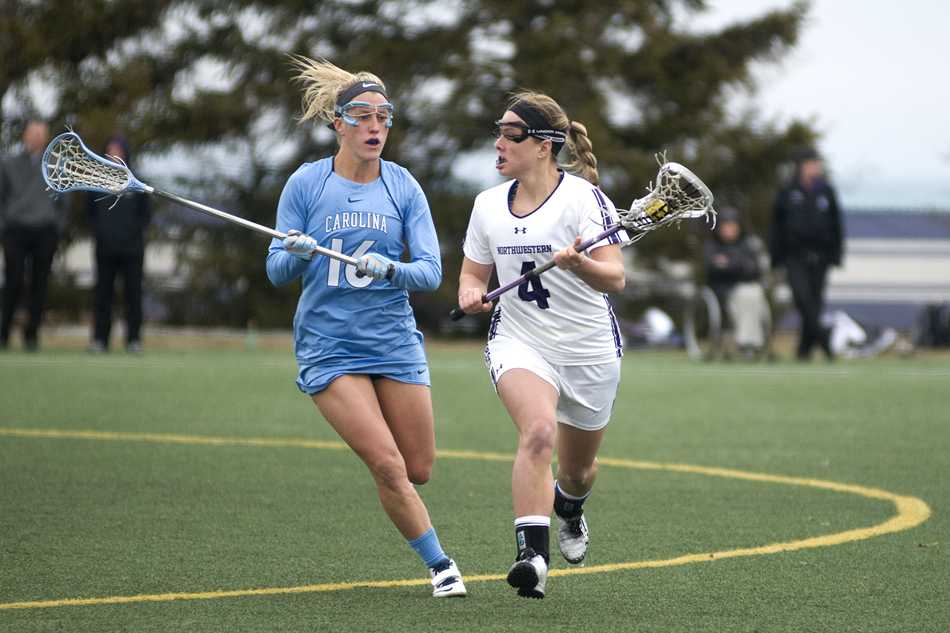 Senior Kat DeRonda goes up against a defender in the midfield. DeRonda had a fruitful weekend in Pennsylvania, leading Northwestern with 3 goals Friday against No. 10 Penn State and 2 goals Sunday in a win against No. 12 Pennsylvania.

With a crucial win in its final away game of the season, Northwestern can now settle in for the home stretch.

The victory was a stronger follow-up to a 5-4 victory against No. 11 Penn State on Friday, which was a dismal offensive showing despite the final result. Sunday’s offensive performance saw slight improvement for the Cats, whose 7 goals came on 17 shots. In Friday’s contest, NU finished with 5 goals on 20 shots.

The Cats’ recent offensive progress perhaps suggests a level of comfort that has been missing from NU’s games this season.

Other than blowouts over Marquette and Michigan, NU’s games have been extremely close. Sunday’s 5-goal win margin is the Cats’ third-largest so far in 2014.

Coach Kelly Amonte Hiller said her team’s shot quality has been off recently, but predicts that game scores won’t continue to stay so low.

“Offensively we’re trying to find our groove, we haven’t shot very well especially the last couple of games,” she said in an interview with Lacrosse Magazine after the game. “I think just sorting that out is going to be key, and I think you’ll see us put some more points up on the board. But hey a win 7-2, we’ll take that.”

Offensive developments aside, NU’s defense continued to roll throughout the weekend in Pennsylvania.

The Cats’ first flex of muscle Sunday was a familiar play. Junior goalkeeper Bridget Bianco made the first save of the game off an initial shot from Penn. The Quakers did end up drawing blood first with a goal in the third minute of the game, but NU’s defense stayed strong with Bianco at the helm, allowing just one other goal the rest of the game.

Bianco also made the first stop in the Cats’ upset over then-No. 1 North Carolina last week, an all-important save the junior said is critical to NU’s success of late.

“In my mind, I need to make the first stop so that the defense knows, OK, I’ve got your back,” Bianco said. “Then the attack knows, OK, well we turned the ball over or their goalie makes a great save, then our defense has our back and they’re going to make a save so that we have an opportunity to score. That’s just a chain reaction that’s made successful these last couple of games.”

The junior keeper had an impressive eight saves on Penn’s 12 shots. Senior Kerri Harrington and junior Haydyn Anigian successfully quelled a Penn attack that averaged more than 21 shots per game going into Sunday’s matchup. The Quakers’ leading scorer, Tory Bensen, only got one shot off all game.

Senior defender Kate Ivory also pitched in to get NU the lengthy possessions the team has been relying on lately. Ivory and senior draw control specialist Alyssa Leonard tied to lead the team with three ground balls each.

On the other end of the field, the Cats’ offense didn’t start clicking until a little less than midway through the first half.

Craig now leads the Cats with 22 goals; the sophomore has scored in all but one of NU’s games this season.

The usual suspects joined Craig on the score sheet. Along with DeRonda — who had a strong showing at Penn State with a team-leading 3 goals — Leonard, senior midfielder Christy Turner and junior attack Kara Mupo all chipped in with a score each.

The four-game win streak should prove good momentum for NU heading into the last few games of the season, which include a home contest against No. 4 Florida and a landmark game at Wrigley Field against Southern California.