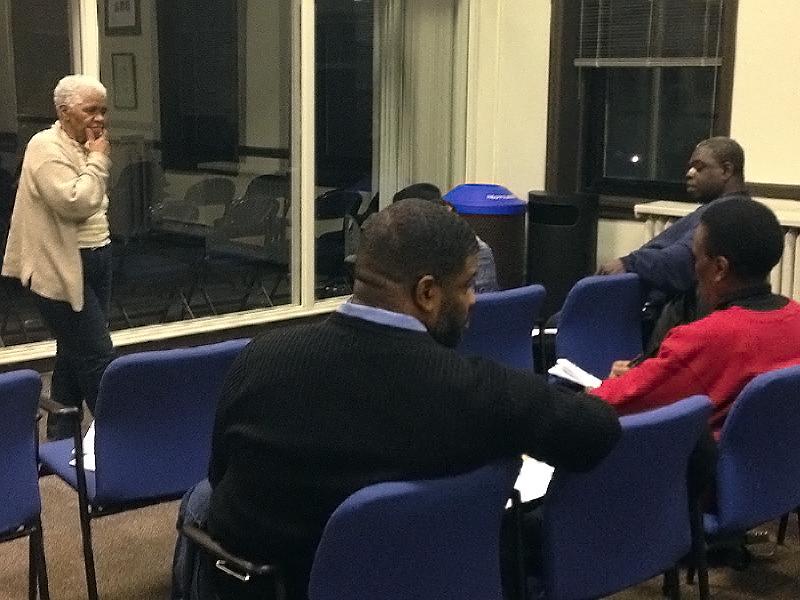 Community activist Betty Ester addresses audience members’ concerns and questions Thursday night in a special meeting outside City Council chambers. Ester has been advocating for Evanston Township since before residents voted for its dissolution in last month’s election.

After residents voted to dissolve Evanston Township last month, the city and the township are collaborating to transition township services to city management by the end of the month, despite concerns from some residents.

Voters elected to abolish the township by an almost two-to-one margin on March 18. The next day, city manager Wally Bobkiewicz submitted a proposal to City Council that would dissolve the township by April 30.

Although the official dissolution process will not begin until the election results are certified by the Cook County Clerk’s office next week, Bobkiewicz said the resignation of former township supervisor Gary Gaspard in October and Bobkiewicz’s subsequent appointment to the position paved the way for a smooth transition.

“There really is not much of a process,” Bobkiewicz said. “We’ve been thinking about it since … last October.”

Bobkiewicz was named interim township supervisor shortly after Gaspard resigned. Bobkiewicz said he asked city health director Evonda Thomas-Smith to help him with the township responsibilities. The two have been working with township employees ever since.

“Evonda Thomas-Smith, our health director, has been working day to day with the township staff, so I feel very comfortable that it will be a pretty seamless transition,” Bobkiewicz said.

The township provides emergency services and general assistance, a program similar to welfare, to qualifying Evanston residents as well as property tax assessments. The township employees who work on emergency services and general assistance will become city employees and work in the health department, Bobkiewicz said. The township department that deals with property tax assessment assistance will also come under city management.

“The transition is going rather smoothly from my perspective,” Thomas-Smith said. “I think change can be challenging for staff. The staff primarily have been long-term employees of the township and of that form of government and (are) now transitioning to the city form of government.”

A group of residents including activist Betty Ester say they are concerned about the transition of township services to city management. Ester held a special meeting Thursday evening outside the City Council chambers at the Lorraine H. Morton Civic Center. About a dozen people attended and voiced their concerns about the dissolution process and the officials involved.

The meeting was held as part of an effort Ester is leading to hold the city accountable with regards to the township, Ester told The Daily, in particular changes in the township assessor’s office.

Ester said she looked into the possibility of hiring a lawyer to settle the matter, but her team did not have enough money to do so. Those at the meeting talked about the possibility of reaching out to a Northwestern or Loyola University Chicago law student to see if they would take the case.

Even after the township is dissolved, Ester said she “will be monitoring the program after the city takes over” to ensure the city keeps their promises.

“I will be speaking up… (for) injustice to the people,” she said.