Parents voice concerns to Board of Education over Haven leggings policy 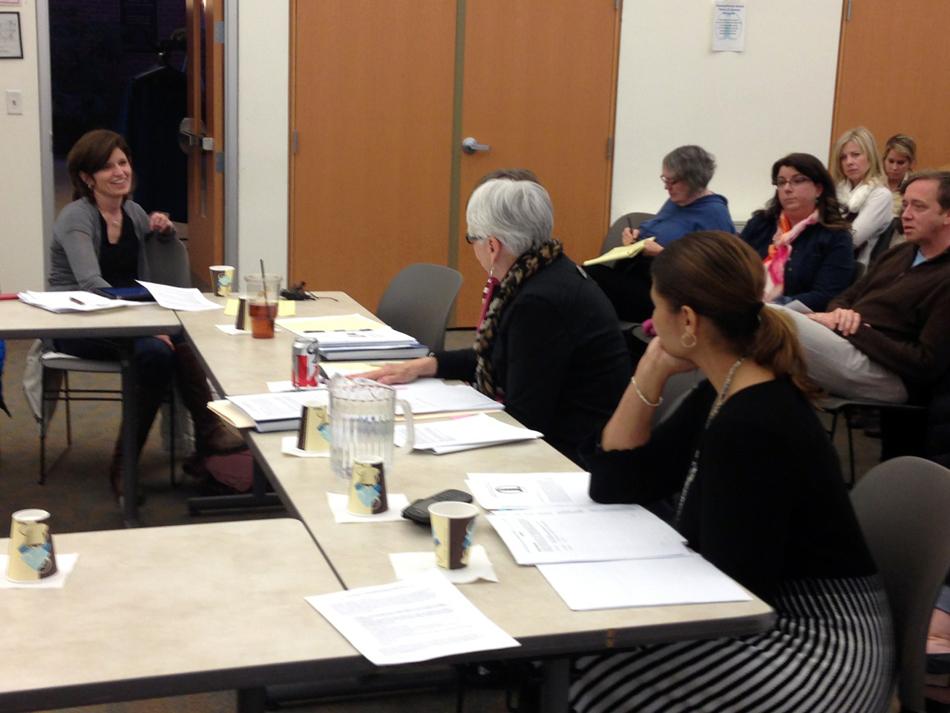 District 65 Board of Education President Tracy Quattrocki questions distinguishing between leggings and yoga pants. Quattrocki, shown laughing, elaborated and said the situation will not be resolved until the language in Haven Middle School’s dress code is clarified.

“Dress codes like these encourage educators to do the sexualizing (themselves) and put them in a no-win situation, frankly,” Haven parent Kevin Bond said at the meeting. “Telling girls that their rather dumpy clothes … are inappropriate or somehow too sexy for school is drawing attention to their bodies in an embarrassing and painful way.”

Just a week after protests of the so-called ban on leggings and yoga pants began, the meeting held at the Evanston/Skokie School District 65 administration building, 1500 McDaniel Ave. drew an audience of fewer than 20 people. Board members and district officials shared their thoughts on the Haven situation and discussed the possibility of clarifying the policy’s language before allowing audience members to contribute to the conversation.

Among those in attendance were parents of Haven students and a few students. Two of the parents wrote letters in advance to advocate for changes in the policy and better treatment of their children.

Bond, whose daughter attends Haven, said consideration of body image should factor into the dialogue as well. He emphasized the differential treatment of girls and boys at the school as a serious issue, referencing “an assembly on proper dress” that was held for only female students. He also said the body type of an individual student could affect how much scrutiny she is subject to under the policy.

“When we set guidelines for dress for girls that are different than boys, we send the basic message that girls’ bodies are too sexy for school,” Bond said.

Bond’s wife also spoke about how children at the school could be “coded,” the term students use for being disciplined for a dress code violation, for tucking in their yoga pants into their boots.

Haven principal Kathy Roberson wrote in a letter to parents last month that the current dress code does not put a ban on leggings but includes certain restrictions for students who choose to wear them.

“It has been communicated to students that ‘if leggings are worn, a shirt, shorts or skirt worn over them must be fingertip length,'” Roberson said in the letter.

Bond’s wife and another parent explained that even though yoga pants are allowed, students are penalized for not making it obvious they are wearing yoga pants, not leggings.

After Bond spoke, another parent, who has been asking questions about the policy since last spring, spoke about her daughter’s experience. Her daughter enjoyed wearing skirts and dresses to Haven, but on at least five occasions she was penalized for doing so. On all of these occasions, the parent said either she or her spouse had found the dress or skirt to be of appropriate length.

“The message had been delivered to (my daughter),” the parent said. “She can’t wear what a lot of other girls wear at school, and she’s heard it loud and clear.”

The parent proposed “staff training by an outside source” for teachers to judge whether a student has violated the dress code and increased “teacher accountability,” calling for teachers to be required to write up a description of when and why a student is disciplined.

A parent of students at Chute Middle School spoke at the meeting, saying the treatment experienced at Haven was not typical of all of the schools in District 65. She said her children were not experiencing the same situations raised by Bond and the other parents.