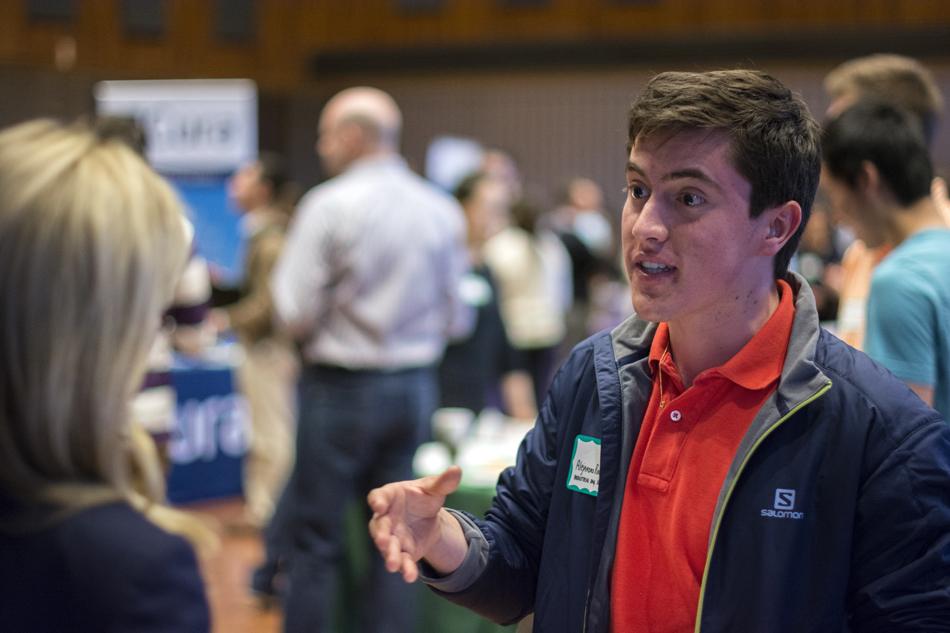 McCormick sophomore Alejandro Rincon talks to a recruiter at the Startup Career Fair on Wednesday afternoon. The fair hosted 34 companies from the Chicago area.

Northwestern held its first ever Startup Career Fair on Wednesday, attracting about 600 undergraduate and graduate students.

The event in Norris University Center hosted 34 startup companies looking to hire students. Most of the participating companies are from the Chicago area, and many are run by NU alumni.

The fair was a joint effort of EPIC, a student entrepreneurial group, and University Career Services, as well as Kellogg School of Management groups eClub, High Tech Club and the business school’s Career Management Center. The collaboration was an effort to bring a larger number and variety of startup companies to campus to attract the diverse interests and skill sets of NU’s undergraduate and graduate students, organizers said.

“This was a team effort,” said second-year Kellogg student Daniel Besquin, eClub’s vice president of integration. “It is one of the first big events Kellogg has hosted with clubs and schools outside of Kellogg, so it is a great start to building a good relationship between schools and to do bigger events across Northwestern.”

Students from EPIC approached Flannery Donahue, career services special events coordinator, with the idea for the career fair. Alice Harra, UCS director of employer recruiting and engagement, said the service has worked in the past with other student groups to host career fairs and workshops. UCS is “making a concerted effort to be advisory to student groups that want to launch events,” she said.

In order to foster conversation between students and employers and to create a more casual environment, students preregistered for the fair and uploaded their resumes to an online portal instead of bringing hard copies.

“Startups are much more relaxed, and we want students to be as comfortable as possible to genuinely present themselves as who they are and connect with these startups to seek long term opportunities,” said Weinberg junior Jasmine Jor, outgoing programming director for EPIC.

SESP senior Josephine Lee, outgoing EPIC president, said she hopes the resume portal will allow conversations between students and startups to continue after the event.

“Our team’s advice to students attending the fair is to ask startups in attendance for their stories and present challenges,” she said. “This will probably spark insightful, and hopefully affirming, conversation.”

Weinberg freshman Mohan Ravi said he went to the fair to find strategic partners for his new healthcare startup. He said he was able to connect with Healthbox, a healthcare accelerator interested in his idea.

“I thought the fair was a great platform to connect students interested in being part of a startup with companies and other students,” Ravi said.

Another company that set up a table at the fair was The Starter League, a software school co-founded by alumni Michael McGee (Communication ’10) and Neal Sales-Griffin (SESP ’09).

McGee, said he was looking for any student willing to “get their hands dirty in different areas” because small startups typically do not have strictly set roles for employees. He also said he would have appreciated such a startup fair when he was at NU.

The event also included a panel on technology, as well as a networking cocktail at Evanston restaurant Bat 17.