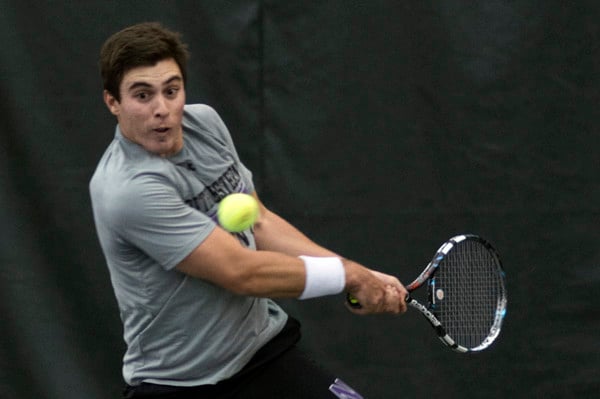 Raleigh Smith gears up for a backhand return. Northwestern’s senior leader stumbled over the weekend, falling in both of his singles matches in close losses to Ohio State and Penn State.

“We gave ourselves a chance to win both matches,” coach Arvid Swan said. “We just didn’t quite get it done at the end.”

The No. 28 Wildcats have now lost five of their last seven matchups.

Friday in Columbus, Ohio, NU dropped the No. 1 and 2 doubles 8-7 (7-2) and 8-6 to fall behind Ohio State 1-0. The Buckeyes pounced to extend their early lead, winning two straight singles matches over sophomore Mihir Kumar and junior Alex Pasareanu, pulling ahead 3-0.

On the brink of defeat, the Cats rallied. Freshman Strong Kirchheimer topped No. 97 Hunter Callahan 6-3, 6-3, and No. 113 freshman Sam Shropshire handled Herkko Pollanen 6-2, 6-4, bringing NU within one point. But it wasn’t enough.

Peter Kobelt, the eighth-ranked singles player in the country, secured the victory for Ohio State with a 6-1, 7-5 triumph over No. 37 senior Raleigh Smith. Although freshman Konrad Zieba would score another win for the Cats, it was too late — Ohio State had already picked up the W.

“We played for the most part pretty good singles,” Swan said. “We could play a little better doubles than we did.”

The Cats have seven matches left before the Big Ten Tournament, held April 24-27. Until then, NU plans to take it one match at a time.

“We’re not gonna look too far ahead,” Swan said. “We’ve got a very good Michigan and Michigan State team coming into town, so the first goal there is to try to get a win against Michigan.”

Four of NU’s nine players are freshman, and Smith is the only senior. All of the newcomers, who make up the eighth-ranked recruiting class in the nation, have had regular playing time this season.

“We have high expectations, regardless of the age of our team,” Swan said. “We’ve certainly had some ups and downs over the course of the year, but that’s pretty much every year. Singles-wise we’ve improved through the year, and doubles-wise we’re improving too.”

The Cats played an especially difficult non-conference schedule but came out looking strong. Of the nine ranked opponents the Cats faced out of conference, they emerged with five victories.

Conference play has been a different story, though — NU has lost four of its first five matches. Still, the contests have been close. The Cats fell on the road 4-3 to No. 54 Purdue, Ohio State and Penn State, lost 4-1 against No. 7 Illinois and picked up a 6-1 victory against No. 57 Indiana.

“If we continue to improve and focus on the process rather than the result, we’ll be happy with the results,” Swan said. “We still have a little ways to go, especially in doubles, but we’re gonna get there sooner rather than later.”

As for the final goal, it remains unchanged.

“The goal is to play in the postseason,” Swan said. “The goal is to finish high in the regular season and to do well in the Big Ten tournament. But that doesn’t happen without winning each match that’s ahead of us. We’ve got seven matches left, so we’re just gonna take it one at a time.”