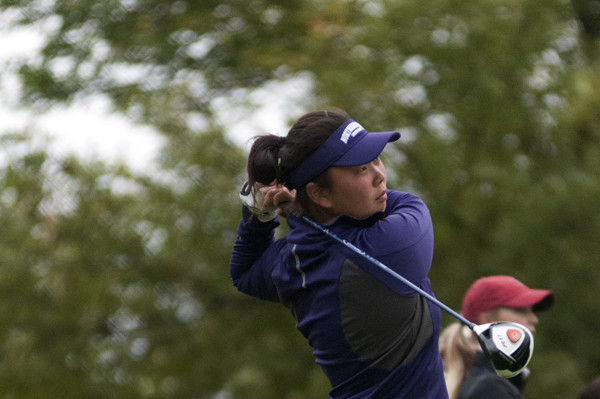 Junior Hana Lee was Northwestern’s top performer during a disappointing weekend for the team at the Bryan National Collegiate. Lee tied for 27th, and the Wildcats finished an underwhelming 14th at the event.

The spring season has been kind to Northwestern, moving the team along a consistent line of progression toward the land of the elite. But golf is far too cruel and unfeeling a game to not attempt to melt such a golden path.

This past weekend the Wildcats finally stumbled, when the No. 17  squad in the country mustered a lowly 14th-place showing in the Bryan National Collegiate. It was the lowest on the leaderboard NU has been thus far, with the previous worst a 7th place at the Stanford Intercollegiate in October. The Cats were coming off possibly their two most impressive results of the season, a third at the stacked Lady Puerto Rico Classic and a first at a none-too-easy Hurricane Invitational.

Still, it would be unfair to rate NU’s performance solely on leaderboard position. The tournament, played at Bryan Park Champions Course in Browns Summit, N.C., offered an incredible field, with 13 of the 18 contestants ranked in the top-40. Nine of those 13 teams were ranked 26 or higher, headlined by No. 3 Duke.

According to NU’s ranking though, the Cats were expected to place fourth. Instead, they failed to beat a single ranked team and even finished behind unranked Penn State.

After everything her team had accomplished early on in the spring, coach Emily Fletcher was unsure of how this result came about.

“I can’t put a finger on it,” Fletcher said. “We had some good practice this week, we were in Pinehurst and played some good golf courses. We just weren’t firing on all cylinders. We weren’t real sharp around the greens.”

The trouble started from the first tee shot Friday. Three of the team’s five competitors played their first nine holes in 5-over-par or worse, and it didn’t get much better from there. By the end of the day, there were two rounds of 80, a 78 and zero sub-par scores. It added up to 16th place after 18 holes.

Clearly, playing nearby during the spring could not overcome the effects of the Chicago winter.

“For the most part, coming out of practicing indoors for the whole quarter and trying to turn that into scoring was kind of hard for us as a team,” said sophomore Suchaya Tangkamolprasert, the source of one of those 80s. “We adjusted as we went along though.”

Indeed, the final two days brought slightly better spirits for the Cats. NU moved up to 14th on Saturday and remained there over the final 18, despite a rude Sunday surprise from Mother Nature.

“The conditions were pretty bad on that final day,” junior Hana Lee said. “Early in the morning, it was really cold and icy. And throughout the round, the wind picked up a lot and it got even worse.”

Of course, NU wasn’t exactly immune to the effects of the bad weather itself. Kaitlin Park, reigning Big Ten Freshman of the Year and in line for an All-America selection as a sophomore, drudged home in a whopping 85 strokes. Freshman Kacie Komoto needed 84 herself over the final 18.

Lee managed the weather well with a final-round 80 and was the team’s most impressive performer of the week, with a T27 result, bettering Park by 15 places.

Tangkamolprasert was the most impressive on Sunday though. On a day where just eight players shot 75 or better, the sophomore managed a 75 herself. It was enough to move her 33 spots on the leaderboard from T83 to T50.

It was a satisfying bookend to what had been a tough week.

“I felt great about my game Sunday,” she said. “It was one of the toughest days out there I’ve played in in my career. Everyone struggled today, so it was nice to have a solid round and finish strong.”

Despite Tangkamolprasert’s good feelings, NU for the most part wasn’t up to par in the Carolina foothills.

With only a few days separating the Cats from their next tournament, though, their coach is unwilling to fret for long.

“This will be a good wake up call for us and an opportunity for us to reassess where we are,” Fletcher said. “It’s one week, not anymore than that.”