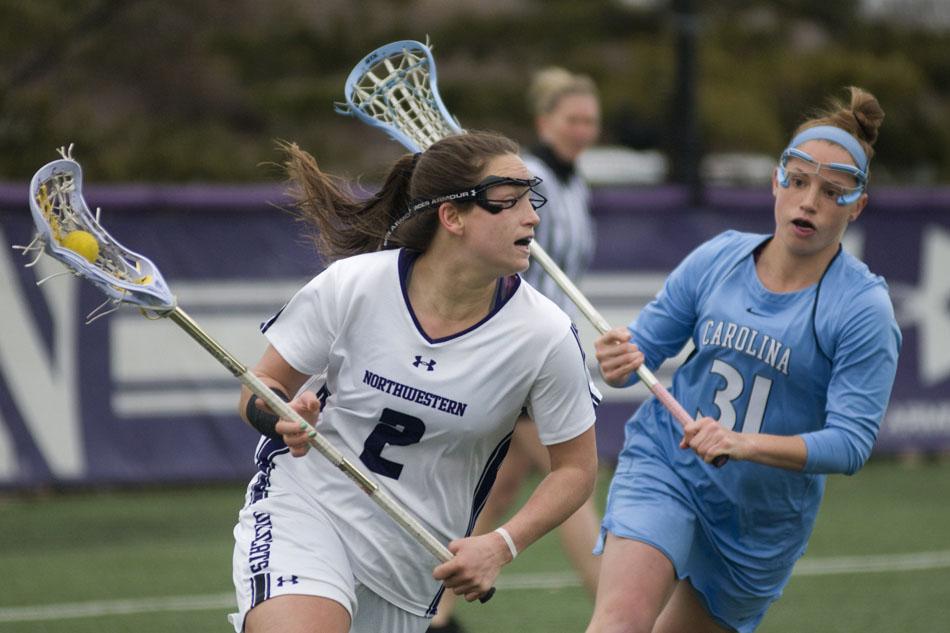 In a game featuring two teams with a storied rivalry, rankings did not matter much Monday afternoon.

No. 7 Northwestern (6-3) technically upset No. 1 North Carolina (11-1) 7-5 in the Cats’ Lakeside Field season debut, but it would be difficult to find a more evenly matched contest in the nation this week.

The Wildcats etched the win — the program’s 300th — against the Tar Heels, who ended NU’s season last year in the semifinals of the NCAA Tournament. North Carolina hadn’t lost a game since April 28, 2013 in the ACC Tournament against Maryland.

NU has struggled since that semifinal loss, falling to teams it normally rolls over in the regular season. But the Cats clearly had a careful style of play in mind when they took the field.

NU played a calculated game on both offense and defense. The Cats shot only 14 times all afternoon — significantly lower than the 24.4 shots the team averages — and shot only twice in a tightly controlled second half.

North Carolina also posted unusually low numbers. Though they average more than 18 goals per game, the Tar Heels got off only 12 shots against the Cats. This was more than anything due to lack of possession on North Carolina’s part — NU controlled the game with drawn out, deliberate possessions, and the Tar Heels barely got the ball in their sticks.

“We had to neutralize their offense because they’re very, very potent offensively, and we wanted to be able to contain their players,” Amonte Hiller said. “And we knew we had to play great team D, too.”

Bianco impressed in goal, notching six clutch saves, many of them dramatic off of low shots.

The junior’s first save came after North Carolina won the game’s first draw control and rattled off a shot within the first two minutes. The first save was critical in asserting her mental edge for the game, Bianco said.

It was North Carolina whose mentality wavered toward the end of the game, when time was running down and NU’s lead wasn’t budging.

The Tar Heels were assessed two yellow cards with less than three minutes left in the game, one assessed to North Carolina’s bench. Though North Carolina’s mentality slipped, Bianco described her team’s purposeful play as a result of “chip on the shoulder” mentality as opposed to a hunger for vengeance.

The Cats seem to have found a measure of success in playing slower and smarter, a plan they’ll need to continue to execute despite the physical grind the offense must go through when relying on longer possessions.

Bianco said it’s back to work Tuesday to prepare for a packed schedule this coming week.

“We’re taking this win and trust me, we’re going to enjoy it,” Bianco said. “But we have two huge games, we have ALC rival Penn State on Friday, and Penn, who is a very good team. So probably tomorrow morning this game will be over.”