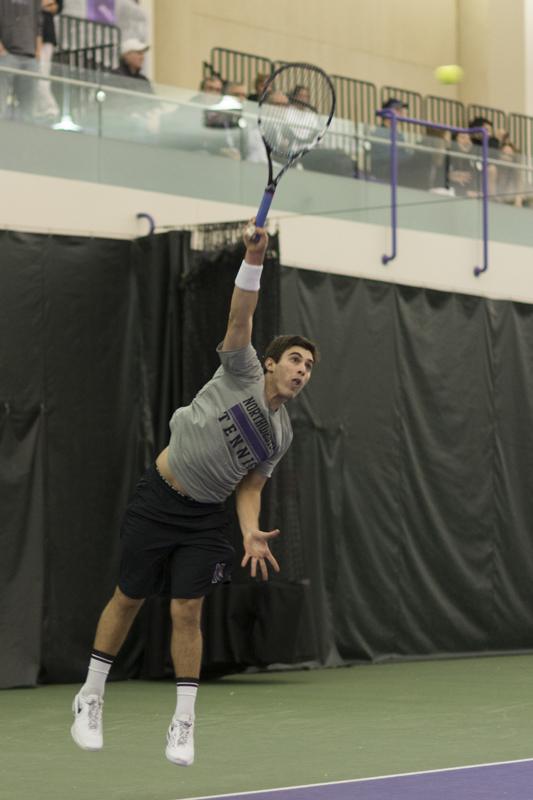 Senior Raleigh Smith, who has never beaten Illinois, serves. The Fighting Illini have three singles players ranked in the nation’s top 33 and the No. 4-ranked doubles squad.

The Wildcats have been struggling of late, a trend the team remedied to a measure in its final action before Spring Break.

Northwestern’s weekend got off to an inauspicious start when the No. 24 Cats fell to No. 54 Purdue 4-3 in West Lafayette, Ind., on Friday night. But the team returned home and got back on track with a pair of Sunday victories, a 6-1 triumph over No. 57 Indiana followed by a 4-0 beatdown of Illinois-Chicago.

The three days of play brings NU to a 12-7 record and a 1-2 mark in Big Ten play. The squad has still lost three of its last five matches, though, including two to lower ranked opponents. With nearly three weeks now separating the Cats from their next competitive action, coach Arvid Swan is left with plenty to think about regarding his team.

But for a coach who has incessantly preached that his team has not reached its full potential, Swan was optimistic about this weekend’s results.

“We gave ourselves a chance against Purdue, it was just a close match that didn’t go our way,” Swan said. “I was really pleased with our progress. The singles versus Indiana was really good, our level of competitiveness was excellent. We made progress and I feel really good about today’s play.”

Even if the Purdue match was an incredibly tight contest, the Cats were expected to win.The Boilermakers were no pushover, boasting a top-60 ranking and a flawless 5-0 at home heading into the contest. In any case, though, NU was the favorite for the Friday night affair.

Purdue, apparently, does not take too much stock in rankings. The home squad quickly stomped on the Cats in doubles, defeating NU’s top two doubles teams, one of which was No. 21 Raleigh Smith and Mihir Kumar, by 8-3 margins.

And the carnage carried over into singles. The Boilermakers rode a straight-sets victory from the No. 3 singles spot to capture a 2-0 lead, then withstood a pair of convincing wins from NU’s elite top two, No. 44 Smith and No. 85 Sam Shropshire, by taking the point at No. 4 singles.

The Cats, now trailing 3-2, buckled down and battled to the wire. Freshman Strong Kirchheimer’s 5-7, 6-4, 6-4 effort knotted the match up 3-3, meaning the outcome of this Big Ten battle would be in the hands of Alex Pasareanu.

The junior, who couldn’t crack a consistent spot in the single line-up until two weeks ago, brought his contest to a third set with everything on the line, but ultimately fell 7-5 defeat in the deciding set.

Pasareanu was actually up 5-4 in that final set and had points at victory, a fact he contends does not mean he faded in defeat.

“I had two match points and my opponent came up with some good shots,” Pasareanu said. “Overall, I wouldn’t say that I played bad or I did anything wrong, I just kind of got a little unlucky toward the end.”

Now on a three-game losing streak, the Cats were desperate to find their form again. The prospects didn’t look good in the opening stages against the Hoosiers. Once again NU’s No. 1 and No. 2 doubles squads stumbled, and, once again, the Cats lost the initial doubles point.

From there, NU put its foot down. The home team seized control in commanding fashion with Smith and sophomore Fedor Baev losing only a combined three games across four sets in dismantling their singles opponents. Ahead 2-1, the Cats continued their assault, finishing out two more straight-sets wins to get to that precious fourth point. The remaining two singles matches also went in NU’s favor, giving the Cats wins in all six singles matches.

The play was reminiscent of the team’s bulldozing of NC State following a heartbreaking loss to Harvard.

If there’s one thing that can be said about these Cats, it’s that they learn from their previous defeats.

“When we lost the doubles point against Purdue, it kind of affected us,” Smith said. “But today, we put it behind us real quick and everybody came out hot, I was up quick, Fedor was up quick. And that helped everybody else who could see that on the scoreboard.”

The Cats finally conquered got the doubles monkey off their back against UIC and saw more of their Indiana form in singles.

NU cruised to the doubles point and barely broke a sweat in singles. Pasareanu, Kumar and freshman Alp Horoz all took their contests in straight sets, each winning a frame 6-0, giving the Cats a 4-0 victory.

With Spring Break on the horizon, NU will be off the court until March 28 — when the team travels to Columbus for a battle with No. 1 Ohio State.

It’s a daunting opponent to restart action against, and, despite their top-25 ranking, the Cats certainly have some holes.

The most notable one is doubles. Prior to winning it against UIC, NU had dropped the doubles point in four consecutive matches, with the team’s double record at just 9-10.

Swan is well aware of the downward trend and the team’s general fits and starts in doubles play throughout the season.

With nearly three weeks to work out the kinks though, the coach is certain his players can turn it around in doubles in time for the team’s daunting date with the Buckeyes.

“We know we need to get better in doubles and we have 20 days to do so,” Swan said. “We’re going to improve in doubles. And the team feels good about today and the progress we’ve made in singles. We’re confident we’re going to make that same progress between now and Ohio State in doubles.”