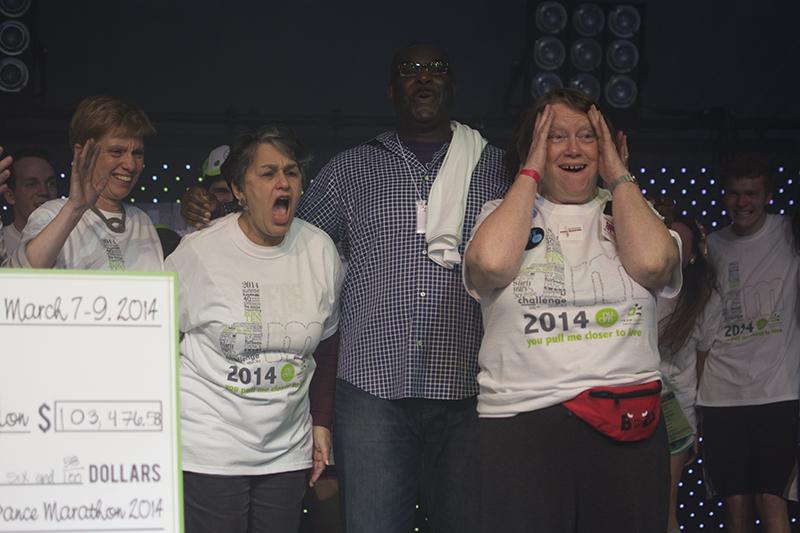 Evanston Community Foundation President Sara Schastok (right) reacts to receiving a check from Dance Marathon for $103,476.58. This was the first time in the two organizations' 17-year partnership ECF had received more than $100,000.

In her thirteen years with the Evanston Community Foundation, there isn’t much of Dance Marathon that Sara Schastok hasn’t seen.

But when the foundation’s board members brought food to DM’s executive board members in the hours before DM 2014 got underway, Schastok, the president of ECF, saw something she never had: an empty tent.

“It’s an amazing thing, the black, cold, cavernous tent, nobody in it,” Schastok said. “It’s just so different, filled with potential. You just know what’s going to happen but it hasn’t started yet. It’s kind of magic.”

In the sixteen years before this one in which the ECF has been DM’s secondary beneficiary, dancers have raised more than $1 million for the local grant-giving organization. But Schastok and DM’s Northwestern and Community Relations co-chairs said the relationship between the two continues to bloom.

NCR co-chair Kari Fleischauer, a Weinberg senior, said while students and other residents have their differences, the partnership provides an avenue for the two groups to come together.

“It’s really great on our end just to see that we can be really cohesive and that a lot of times our interests really are parallel,” Fleischauer said.

Fellow co-chair Samir Datta, a Weinberg senior, said the bond plays an important role in exposing students to areas of the city they don’t often encounter.

“What surrounds Northwestern is probably one of the richer parts of Evanston by far and the majority of students, ourselves included, don’t have an exposure to the underprivileged parts of Evanston,” Datta said. “But by providing them with a way by which to contribute to those parts and by making it easy for them can really make a difference.”

Datta noted the importance of DM itself in bringing ECF’s message to students, particularly in areas that don’t directly affect the University. He referenced the speech given by Sue Loellbach of Connections for the Homeless during Block 2.

Loellbach told the dancers funding from the ECF has helped Connections put 20 chronically homeless people into housing for each of the past three years.

“Those of you who are dancing are saving lives,” Loellbach said.

Although the amount of money given to ECF over the years surpasses any amount given to a single primary beneficiary, Schastok said the most rewarding part is bringing students together with the community.

“Northwestern students are part of Evanston and so it’s really great to be part of the process of connecting them in the community we all share,” she said. “There’s a great joy in doing it. It’s about more than money.”