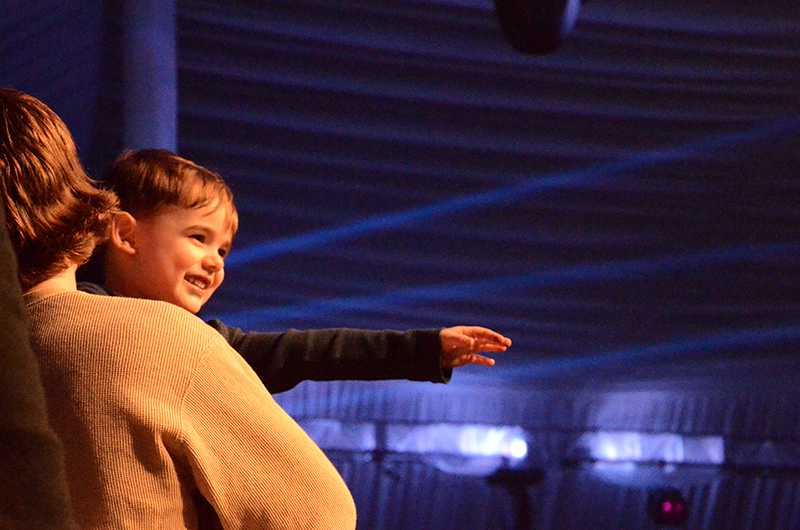 When hoards of dancers shuffled into the Dance Marathon tent and sat down, the scene resembled a dinner theater — albeit with a very tired audience — more than it did the beginning of Block 9, Dance Marathon’s second-to-last block.

Dancers were treated not only to a short dinner break as a cappella group Asterik, improv and comedy sketch group Mee-Ow and rhythm ensemble Boomshaka performed.

“I thought that the performances during dinner were very diverse,” the McCormick senior said. “It’s good entertainment to sit down and listen to.”

This is Van Atta’s second DM, and the senior said he’s impressed with how smoothly the event has gone.

“My freshman year, it’s when they had the issue with the tent where we actually had to sit out for like two or three hours, so this has gone off without any hitches,” he said. “It seems to flow pretty seamlessly, I’ve had a really good time.

Block 9’s theme, “Let It Reign,” brought a dance competition in which one student was crowned winner, costumes that ranged from tiaras to pharaoh headdresses and music from the pop music’s royalty. Dancers seemed revitalized after dinner, jumping to songs from Michael Jackson, Madonna and Beyonce.

“Dance your hearts out tonight,” Meyers said, “because I promise you that once this is done, you will never ever want to dance again.”

Marc and Cadden Kapsalis, whose son Caleb has Duchenne muscular dystrophy, took turns reciting the story of their son’s diagnosis. Cadden Kapsalis told the crowd how the family first got involved with DM, recalling the phone call she received from Johanna McCarthy, dancer relations co-chair.

“She went on to explain, ‘We chose children’s epilepsy last year to raise money for and this year we’ve chosen Team Joseph for Duchenne, and last year we raised over a million dollars,'” Cadden Kapsalis said, “to which I replied, ‘I’m listening.'”

The Kapsalises went on to thank the dancers for their work and commend Team Joseph founder Marissa Penrod.

“Imagine having hope thrust back into your life because someone like Marissa Penrod decided she was going to fight,” Marc Kapsalis said. “And imagine walking into this tent yesterday and knowing that your life will never, ever be the same.”

Sara Bareilles’ song “Brave” played the Kapsalises off the stage.

The finance committee once again ended the block, taking the stage to announce that by Feb. 26, the full-money deadline, DM had raised $556,905.