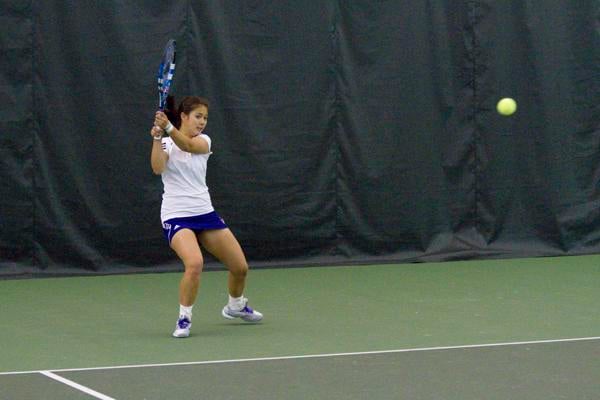 Nida Hamilton sends a shot cross court. Hamilton, a junior, and senior Linda Abu Mushrefova performed consistently well in doubles' play throughout the season for NU, but lost to the No. 2 team from the University of Southern California in the first round of the NCAA Tournament.

The Illini open their conference season against the highly ranked Wildcats, who have won their last two contests. Last time the two teams came together, March 2013, NU won 5-2. The Cats won all three matches for the doubles point and won at courts 3, 4, 5 and 6 in singles.

Illinois enters the conference matchup with four returning starters from last season and three new freshmen. NU returns with five veterans and four freshmen. Led by seniors Veronica Corning, Belinda Niu and Nida Hamilton, the Cats have shown great performances over highly ranked opponents but have struggled against opponents ranked lower than them such as then-15 Vanderbilt (loss), -18 Baylor (loss) and -39 Purdue (4-3 victory).

NU keys on the doubles point for their victories and will have to take it against Illinois to get a victory. The Illini this season are 4-0 when winning the doubles point and have won those matches with a cumulative team score of 26-1. The Cats will need to claim the doubles point as well as silence their singles opponents who, despite losing to then-No. 23 Notre Dame, defeated then-No. 25 Texas Christian.

The Cats lead the Big Ten with a 2-0 record despite the rest of the conference only having played at most one game. With victories over Indiana and Purdue, NU looks to continue its conference win streak against Illinois.