I Will Survive: Recapping the second episode of ‘Survivor: Cagayan’ 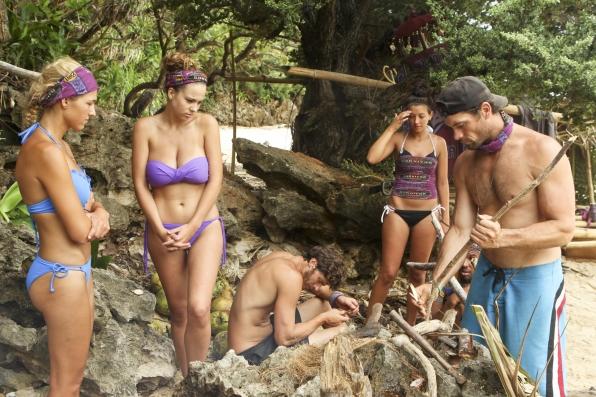 Welcome to The Current’s “Survivor” blog, which will follow each episode of the hit reality show as Northwestern’s own Alexis Maxwell competes to win $1 million. Every week, visit dailynorthwestern.com/current to read our recap and follow Maxwell on her path to the finish line.

For a few minutes Wednesday night, it looked like SESP senior Alexis Maxwell’s stint on “Survivor: Cagayan” would be short.

After volunteering to sit out an immunity challenge consisting of what was essentially an egg toss involving water followed by a vertical maze, Maxwell was on the chopping block. Despite leading in the water-tossing portion of the challenge, Maxwell’s “Beauty” tribe lived up to its name by blowing it all on the maze, finishing third in the challenge.

With “Brains” and “Brawn” safe from elimination, “Beauty” was forced to vote off a tribe member for the first time this season.

Maxwell was quiet during the negotiations, and one plot centered around a plan to vote for her. At tribal council, Brice did not pull punches when referring to Maxwell.

“I’m pretty sure she’s gunning for me,” he said. “I feel like everyone should pull their own weight around camp.”

Ultimately, “Beauty” members Brice and Morgan couldn’t snag a key third vote to eliminate Maxwell. Instead, a four-person alliance of Maxwell, LJ, Jefra and Jeremiah split votes between Brice and Morgan to avoid the possibility of a surprise Immunity Idol. With Brice, Morgan and Maxwell tied at two votes apiece, Brice received the first two votes on the revote and was eliminated.

The episode was a good litmus test for the advantages and weaknesses Maxwell has this season. Because of her slight build, she is unlikely to be of much use to the tribe during challenges or to win individual immunity following the merge. These types of players often get voted out early, when the team is worried about weak links in their challenge performances, or become inevitable prey when a preferred stronger player has individual immunity.

But Maxwell is also unthreatening and won’t hurt herself by talking too much (as Brice did) or pulling off one too many schemes. And if she can stick around through solid performances from the tribe and steal immunity in a less physically demanding challenge, we’ve seen smaller women pull off that path to the title because they often haven’t angered jury members along the way (think Natalie White, who ascended to the throne during a season dominated by the conniving, scheming Russell Hantz).

Maxwell seems to have a solid four-person alliance in what is now a five-person tribe, with Morgan the odd woman out. But once that tribe gets down to four, she will have to up her game to avoid being the next one to see her flame extinguished.

Alexis quote of the week (responding to Brice’s criticism that she doesn’t help out around camp): “He knows the game. He can totally use that as ammo to try and get me out.”

Alexis face of the week: A wicked grimace as the “Beauty” tribe lost its lead on what looked to be a very heavy maze (this was a challenge that, shall we say, disadvantaged “Beauty” against the other two.)