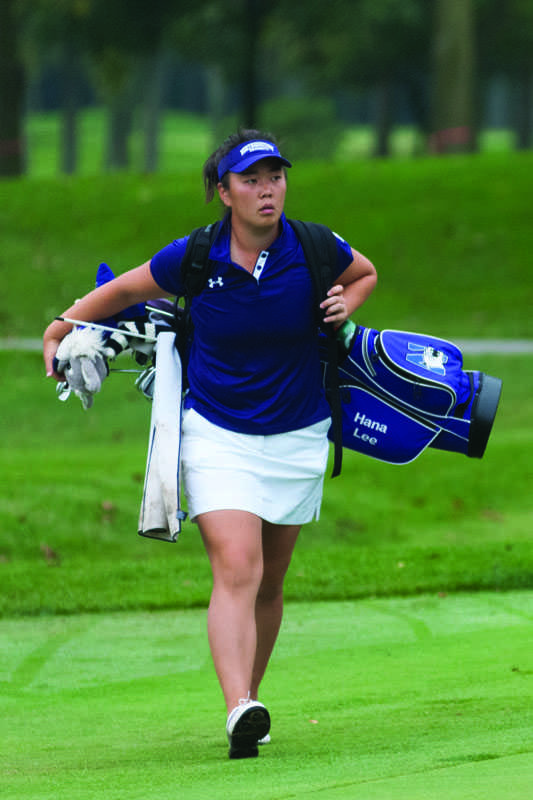 Junior Hana Lee walks the course. A member of last year’s First-Team All Big Ten, Lee lead the team with a tie for fifth place.

A stacked roster of returning players, a top-20 ranking and the confidence that comes from putting together the best season in school history last year, Northwestern had it all for the 2013-14 campaign — except a victory.

But now, the Wildcats can add that to their ever-more-glowing resume.

In the 17-team Hurricane Invitational, No. 18 NU led a furious charge down the stretch of Wednesday’s final round. Four strokes behind No. 26 Iowa State midway through the last 18, the Cats muscled their way to the finish, moving from +15 to +12 while the Cyclones fell from +11 to +13 to snatch away the title. The first-place finish was made possible by a trio of NU competitors notching birdies on two of the last four holes.

It was the squad’s first win in six events this season and one with a closing kick for the memory books, even if the Cats were unaware of their prospects down the stretch.

“We didn’t know where we stood coming into the last few holes,” coach Emily Fletcher said. “The girls did a great job on the last 7-8 holes, we made quite a few birdies on the 15th hole, we made two more birdies on 18 coming in and we played the par-3 14th, which played really tough today, in par. That was pivotal. There’s a friendly rivalry there with Iowa State, and it was nice to get the win.”

Not that proceedings were smooth throughout. NU squirmed during the first day, with rounds of 2-over or worse littering the team’s scorecard and leading to an opening 6-over 290 that left the Cats tied for fifth, six shots behind.

As the old adage goes, though, you can’t win a tournament on the first day, but you can lose it. While it certainly wasn’t the showing the Cats hoped to post to start the event, NU had relatively little ground to make up and still had 36 holes to do it.

“It didn’t feel like we played that bad,” Fletcher said. “We struggled a little bit, and we were a little untidy on and around the greens. But we didn’t play that bad. Our girls, though, understand that they may have a rough stretch of holes, and they need to just keep fighting. They’re a pretty explosive group, and they can make birdies in bunches, which they certainly did over the final two days.”

With a mix of talent and experience, the Cats made quick work on the comeback trail. A new day saw a revitalized group. Sophomore Kaitlin Park and freshman Kacie Komoto each posted 2-under rounds, and the rest of the squad remained steady enough for NU to total even par for the day, a score that shot them up to second place and within three shots of the Cyclones’ lead.

And that was close enough. Needing a four-stroke jump for the sole victory but only having to move up one spot to tie for first, the Cats pounced on the opportunity, even if they delayed the Cyclones’ inevitable overthrow.

Of course, the Cats were able to get over the hump for their initial victory of the season for a reason — they were the highest ranked team in the field. In fact, only two other teams in the Golfstat top 50, No. 26 Iowa State and No. 30 Miami, were in the tournament. But NU proved once again that this spring is setting up to be better than last season’s record-breaking effort.

In two spring events, the Cats have beaten six top-30 squads, including No. 8 Alabama. The five-deep nature of the squad is in full swing. Scores were a little more spread out than in the spring-opening Lady Puerto Rico Classic, but all five competitors placed in the top 40.

Park continues to elevate her play above her Big Ten Freshman of the Year form and junior Hana Lee, First-Team All-Big Ten last season, flashed this week with a team-leading finish, tied for fifth. Komoto’s stock continues to rise as well — finishing tied for seventh.

Things are looking up for NU and their leader, last year’s Big Ten Coach of the Year, felt the victory is just what this squad needed.

“It was a very timely win for us,” Fletcher said. “We’ve certainly played well this year and had some top finishes, but there’s nothing like winning. That will be a boost to our confidence. This group is progressing. They’re really working hard. Their energy and effort level is there. It’s been an asset for us, and it’s something we’re definitely getting better at.”