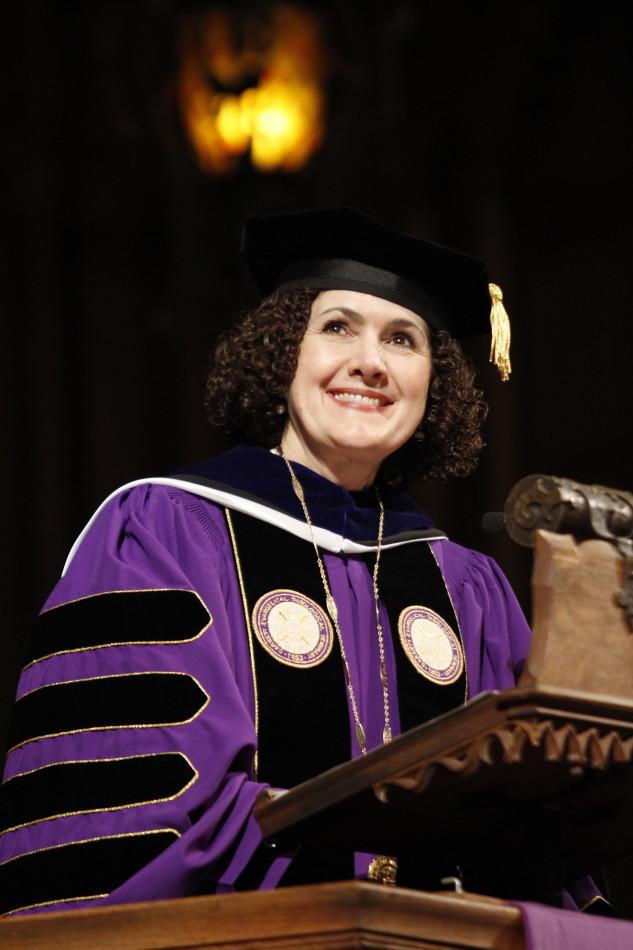 Dr. Lallene Rector, a Texas native who previously was the seminary’s vice president for academic affairs and its academic dean and is also an associate professor of Psychology of Religion and Pastoral Psychotherapy, was unanimously elected by the seminary’s board of trustees last summer. She is also the first layperson to be elected president.

“I’m very excited about having this opportunity and this privilege to lead the school,” Rector said.

Before becoming president, Rector worked as a faculty member at the school of theology for 27 years.

“She knows us,” Garrett spokesman Shane Nichols said. “Most of the presidents that were hired in recent years were external candidates, the majority of her academic career has been at Garrett.”

The seminary itself was founded by a woman, Eliza Garrett, the wife of a former mayor of Chicago, and Rector said she’d “like to think Eliza Garrett would be very pleased.”

“This was just the right time for it,” she said. “The seminary has almost from its inception had women, and over the years we have been very committed to diversity in our faculty and student body.”

Nichols also said he felt it was the right moment for a woman to become president of the seminary.

Besides the significance of Rector being the first woman to become president of the school, she is also the first layperson to hold the office. Nichols said the school is not only “focused on educating clergy, but also laity.”

Rector said there are a lot of laypeople who are interested in this kind of theological education without necessarily wanting to become ordained.

“There are fewer people pursuing ordination in mainline denominations, and there are more people, young people especially, interested in not necessarily ordained ministries,” Rector said. “It’s possible that the seminary may seem more accessible and perhaps more relevant to people not interested in ordination.”

The process for her selection as president began as early as last spring with more than 100 applicants. Rector officially started the job Jan. 1.

“She is a loyal and lifelong United Methodist who brings administration skills and is much beloved by our alumni base,” Nichols said.

Garrett was founded in 1853, two years after NU’s founding. Its newly inaugurated president hopes to continue to foster the relationship between the two institutions of higher learning, as well as to the Evanston community as a whole, through interfaith initiatives and continuing education opportunities.

She said the seminary has a “fabulous” relationship with University President Morton Schapiro, who was present at Rector’s inauguration and even said a prayer in Hebrew during the ceremony.

“He’s just been a real friendly supporter and a person who appreciates the seminary,” Rector said. “We look forward to a continuing positive relationship with the University.”