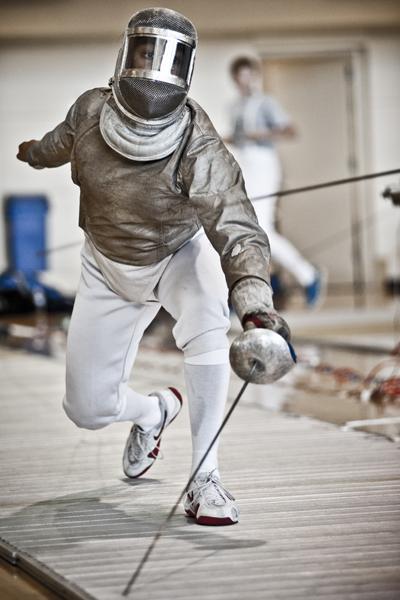 Freshman sabre Alisha Gomez-Shah lunges at her opponent in a past match. Though the team’s lone senior, Dina Bazarbayeva, took home gold in epee, the team’s overall bronze was the result of a good effort from old and young.

No. 9 Northwestern returned to Evanston with a mix of triumph and disappointment after placing third overall at this weekend’s Midwest Fencing Conference Championship in South Bend, Ind.

“We were expecting to do a lot better,” said senior epee Dina Bazarbayeva, who scored gold in the women’s individual epee competition. “It was kind of a letdown for the team to come in third, but overall I think everyone tried their best, and it just didn’t work out this year.”

Coach Laurie Schiller said he doesn’t think “disappointing” was a good word to describe the weekend. Each squad fell in its semifinal matchup to either No. 2 Ohio State or No. 4 Notre Dame, both of whom already beat the Cats twice this year. The Buckeyes went on to take home gold while the Fighting Irish walked away with silver.

In sabre, NU lost to Notre Dame in the semifinals but cruised to a 5-0 victory in the bronze medal matchup against Michigan State. In foil, Ohio State topped the Cats, who swept Lawrence to earn third. And in epee, the Fighting Irish again triumphed in the semis over the Cats, who once again rebounded to pick up bronze.

“We would have liked to have finished higher,” Schiller said. “I feel that we certainly had the capability to do that. But the kids fenced hard, and we made a good effort. I have no criticism of what anyone did. It’s just that unfortunately sometimes the touches didn’t go where we wanted them to go.”

Overall, Ohio State wore the crown with 795 points, Notre Dame scored silver with 780 points and NU finished third with 735 points. The Buckeyes or Fighting Irish have now prevailed every year since 2001, the last time the Cats sat on the throne.

“I think we were all very nervous,” Bazarbayeva said. “All of us wanted to win so badly that we, at least for the epee squad, our anxiety, that got in the way of us performing at our best.”

In the individual competitions, NU had a strong showing. It was a mix of youth and experience in the women’s individual epee event, in which Bazarbayeva earned first and freshman Mandeep Bhinder tied for third.

“It felt really good winning the gold medal,” Bazarbayeva said. “It was my last conference championship, and that was one of my goals — to win individuals. So I was very happy, especially when I was in my final bout and I was losing and I came back and won. It was a good way to end the year.”

Schiller said he was thrilled his sole senior placed first in her final conference championship.

“I though Dina winning was excellent,” he said. “Not only did she win it, but she was down 13-9 and ran off 6 straight points to win it. So that’s the kind of effort that you really want to applaud.”

A number of other fencers had top-eight or top-16 finishes for the Cats, but none came away with a medal. Still, several fighters earned All-MFC honors this weekend.

Next weekend, the Cats head to Detroit for the NCAA Midwest Regional. Schiller said he will work on the little tactical issues his players faced in this tournament over the next few days.

“At this point in the season, it’s just keep yourself as sharp as you can, and you get your mind ready to go,” he said.