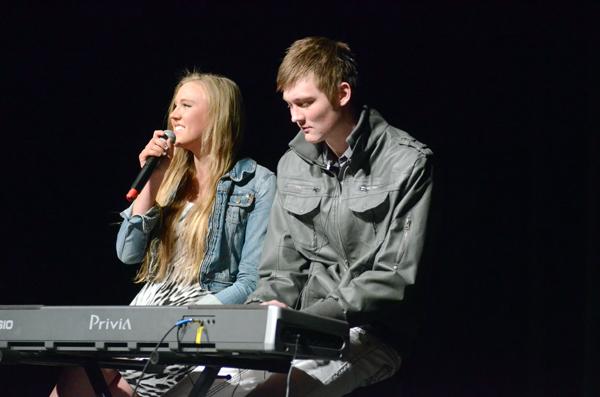 Weinberg sophomore Kale Abrahamson and his sister Kaya perform a duet of Rihanna’s “Stay.” The duo tied for top marks from the judges and were voted second place by the audience.

Hosted by the Student-Athlete Advisory Committee, the event in Cahn Auditorium featured nine different acts from student-athletes. All in all, the event raised $1,600 online and $1,291 at the door — triple the amount raised last year.

“This was for as worthy as cause as you could possibly have,” Michael Wilbon (Medill ’80), host of ESPN’s Pardon the Interruption and a judge for the event, told The Daily after the event.

Students from various sports performed their hidden talents, generating laughs in the process. Current Oakland Raider Nick Roach, who played at NU from 2003-2006; assistant women’s basketball coach Allison Guth and Wilbon gave each contestant a secret score between one and 10. When the results were tallied, women’s soccer goalkeeper Ali Herman, a Medill junior, was announced as the winner.

Herman and sophomore forward Kale Abrahamson of the men’s basketball team tied for first place on the judges’ ballots, but Herman’s fans cheered her to victory in the runoff vote. Herman read a poem she wrote about failure, and Abrahamson sang Rihanna’s “Stay” with his sister Kaya.

“I’ve done this talent show for the past few years, and every year I’ve kind of just assumed that I wasn’t gonna win ever. So it was nice to finally get recognized,” Herman said.

She said watching a friend from high school read his poetry aloud inspired her to try herself. She has only ever performed at the athlete talent show but has conquered nerves in the process.

Other acts included a dance by the women’s basketball team, a music video by the women’s swimming and diving team and a number of athletes showcasing their voices.

“You have to be the only person ever to break 70 on a golf course and utter the words,‘This is how we do,’” Wilbon said.

“The entire Northwestern community has been behind Team Joseph from the very first day we were selected as the beneficiary,” Marissa Penrod, founder of DM primary beneficiary Team Joseph, told The Daily. “Every step of the way for the past nine months, it’s been an inspiration and an honor to work with this school.”

Team Joseph, a Detroit-based organization working to find a treatment or cure for Duchenne muscular dystrophy, is named after Penrod’s son Joseph, who is currently fighting Duchenne.

At the end of the show, all the athletes came back on stage to jam to Carr’s rendition of the Backstreet Boys’ “Everybody (Backstreet’s Back).”

“I’ve never done anything as weird and cool at Northwestern,” Wilbon told The Daily.