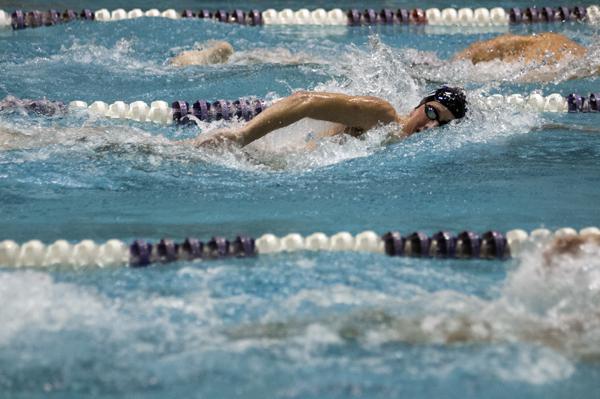 Though Northwestern ended up ninth at the Big Ten Championships, sophomore Jordan Wilimovsky qualified for the NCAA Tournament in the 1,650-yard freestyle with a personal-best time of 14:42.99.

ANN ARBOR, Mich. – When the lights shone brightest at the Big Ten Championships this week, Northwestern failed to capitalize on the momentum it had built all season long, as the Wildcats fell to a ninth place finish.

Michigan cruised to its fourth consecutive conference title, dominating from start to finish.

It was a difficult meet to swallow for the Cats after the team posted a 7-3-1 record during the regular season. Not only was the number of wins impressive, but it was the quality of teams NU was able to take down that showed the progress the program was making. Now, it’s coach Jarod Schroeder’s responsibility to wash away the struggles in Ann Arbor and remember the successes before the conference championship.

“That’s something Jarod wanted us to take away from this year,” senior Chase Stephens said. “We had one of our best records in a long time. We faced a very challenging, very deep lineup before we had Big Tens. Going 7-3-1 is an accomplishment in my book. It was frustrating that we didn’t live up to our potential at Big Tens.”

The relay units were a major letdown for NU over the course of the meet. The Cats did not finish better than seventh in any of their relay events.

“Our relays were a disappointment all week long,” he said. “There’s no excuse for that. We need to show much better than that.”

If there were any potential explanations for slower times, one might be how shallow the pool is at the Canham Natatorium. Because it is only seven feet deep, the sprint races tended to see more waves, which can affect some of the swimmers who are trailing the leader and have to deal with the wake in the pool.

After the first two days of the four-day meet, the Cats clung to eighth place out of 10. The team received points from Stephens in the 50-yard freestyle, sophomore Jordan Wilimovsky in the 500-yard freestyle and freshman diver Andrew Cramer in the 1-meter event.
But the last few days weren’t as kind to NU. The squad struggled to get into scoring heats, as only Stephens, Wilimovsky, Cramer, junior Mark Ferguson and sophomore Grant Halsall put points on the board over the final two days.

The Cats’ shining moment in the meet came in the 1,650-yard freestyle event, in which Wilimovsky took second place behind Michigan and USA swimmer Connor Jaeger, the reigning national champion in the event. Not only did Wilimovsky break his personal best and school record, he earned an automatic bid to compete in the NCAA Championships with an NCAA ‘A’ cut time of 14:42.99. Wilimovsky currently has the third fastest time in the nation in that event.

Schroeder knew his talented sophomore could cut some time off his season-best numbers, but he didn’t know he would perform this well.

“I thought maybe he could sneak under 14:50 seconds but to go 14:42 was awesome,” Schroeder said. “Hopefully that gives him a lot of confidence going into NCAAs.”

Wilimovsky also demonstrated in Ann Arbor how he has become more of a complete swimmer. Not only is he dominating in the distance events, which he made known are his favorites, but he’s also improving his times in other events, like the 400-yard individual medley. Scoring points in different ways at meets is something he knows he’ll need to do next year for his team.

“It’s something Jarod and I worked on this year,” Wilimovsky said. “It’s a lot more helpful for the team to swim better at different events.”

The other potential NCAA qualifier could be Stephens in the 100-yard freestyle, with his time of 43.39 seconds. Schroeder and Stephens aren’t sure whether that will be enough to make the cut, but Schroeder raved about his workhorse freestyler and the effort he put in over the week.

“I feel bad for the guy because he’s been a mainstay on all of our relays and time trials,” Schroeder said. “It probably took a cumulative effect on him over the course of the meet. He’s had a great career for us. He’s come from humble beginnings as a walk-on to one of our leaders. I’m going to miss the guy. He means a lot to the team.”

With a group of seniors graduating, NU will have needs to fill in terms of leadership. Wilimovsky made his case with his outstanding performance on the big stage. Sophomore Van Donkersgoed has become a vocal and well-respected leader for the team as well. Ferguson, with his performance in the 100-yard backstroke and butterfly, has become a reliable contributor for the Cats going forward. Regardless, Wilimovsky isn’t worried about filling the void next year.

“It’s the whole team’s responsibility to find ways to step up and score points,” he said. “It’ll be hard to replace guys like (seniors) Matt (Wilcox) and Tim (Smith) with their leadership and Chase as well. But I think we’ll be able to do it and have a good season next year.”