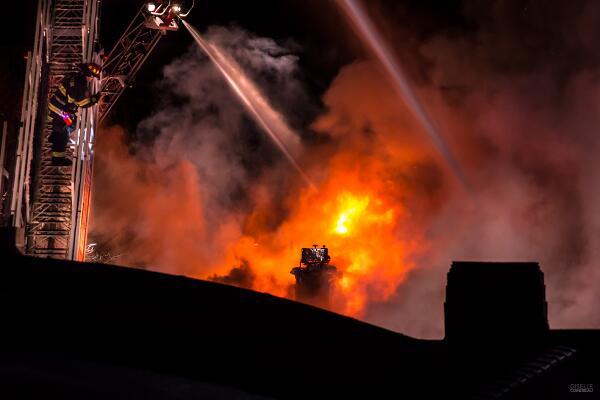 A fire on Davis Street in December destroyed three Evanston businesses. It took nine fire departments about four hours to put out the fire.

The Evanston fire department responded to a record number of calls in 2013, surpassing 2012’s then-record-breaking total.

“2012 was the busiest year up ‘til this past year, and we’ve surpassed that,” said Fire Chief Greg Klaiber, who presented the report to the council. “For two years in a row we have increased and surpassed our numbers.”

The department recorded 9,373 calls in 2013, a 60 percent increase from 1984, showing a general uptick in calls to the department despite yearly fluctuations, Klaiber said. Of the calls, 129 were made for confirmed fires, resulting in an estimated $2,772,579 loss.

“Everybody wants to know what’s the dollar loss,” Klaiber said. “I like to talk about … what is the percentage of property that was saved, and what is the dollar amount associated with that?”

Firefighters saved 97 percent of property during the 2013 fires, equaling about $105 million worth of property, Klaiber said.

Klaiber also noted that last year was the first since 2009 in which a fire resulted in a death.

A number of other incidents were reported, including 357 “assist invalid” requests , ones made by residents who need assistance but not necessarily an ambulance, Klaiber explained.

In 2014, the department is looking to implement several changes, including promotional exams for captains and shift chiefs, member certification of Pediatric Advanced Life Support and installation of a “new fire station tone out alerting system.”

The department has 110 members with three divisions: emergency medical services, fire suppression and special teams. All members comprise the five-station department. The stations are spread out in an ideal placement, Klaiber said.

“We have an excellent response time, and it’s a result of station configuration,” Klaiber said, regarding the department’s 2013 reported average response time of 3 minutes and 5 seconds.