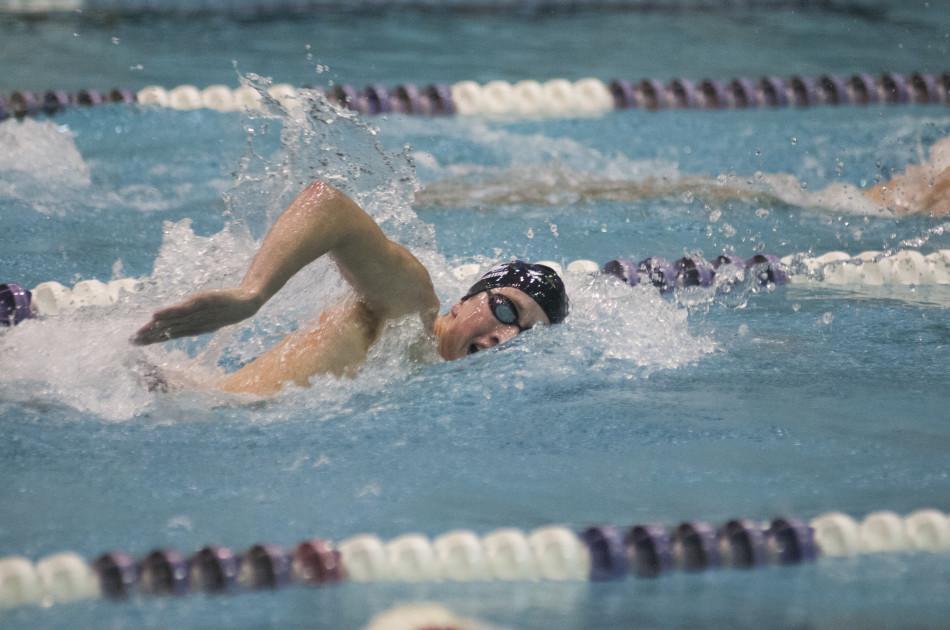 Sophomore Jordan Wilimovsky will race Michigan’s Connor Jaeger for the second time this year at the Big Ten Championships on Wednesday. Wilimovsky lost his last meeting with Jaeger and hopes to stay close in the rematch.

With his 6-foot-8-inch frame, former Northwestern swimmer and Olympian Matt Grevers cast a large shadow over the Wildcats’ program after he and handful of other talented swimmers graduated.

It wasn’t the humble Grevers’ fault, nor even that of any of his teammates. They had just set the bar high for NU swimming and diving with their strong finishes at the Big Ten Championships. So when the Cats found themselves in the basement of the conference in the following years, some saw it as a disappointment.

But this year, NU and coach Jarod Schroeder head into this year’s conference meet on Wednesday in Ann Arbor, Mich., without the baggage of past glory.

“We were trying to be that team,” Schroeder said. “We had to take a step back and be our own team. They had their success and we strive for that success. But we’re a different make-up than they were.”

The process began before this regular season when Schroeder purposefully made his team’s schedule more difficult than it had been in years past. He wanted his swimmers to face some of the best competition the country has to offer before the conference championships came around. NU responded by rattling off seven wins including two against conference foes.

Senior Chase Stephens said the fierce slate of teams the Cats faced this year will hopefully set them up for future success.

“If we want to get better, we have to have a higher level of competition,” he said. “Jarod’s been trying to improve our schedule to the point where we can compete at a national level and compete with the best teams.”

Just because the Cats have gone toe-to-toe with some of the best teams in the Big Ten already doesn’t mean their conference rivals will roll over when NU enters the pool. The morning swims will be crucial to the Cats’ success in the upcoming days. If they can find a way to sneak into a handful of consolation finals, Stephens and NU can climb their way up into the middle of the pack.

But there will still be some swimmers that Schroeder will be counting on to make the Championship Final. Stephens won’t be surprising anyone after his breakout swims in the 50- and 100-yard freestyle events in last year’s Big Ten Championships which vaulted him into the top 10 in the conference in both disciplines. Sophomore Jordan Wilimovsky will have another crack at trying to take down Michigan’s national champion distance swimmer Connor Jaeger in the 1,650-yard freestyle. The two already battled earlier this year, and though Jaeger ended up with the victory, Wilimovsky hung with the speedy Wolverine for most of the grueling race. That confidence will be something Wilimovsky will bring to the pool in Ann Arbor.

“I just want to stay close to him,” he said. “It’s always fun to race him. He’s the best in the country right now. If I can race him and stay close, it’ll hopefully be like that at NCAAs.”

One of the main reasons for the Cats’ success this year was the contributions the team received from its freshman class. Whether it was from diver Andrew Cramer or freestyler Charlie Cole, the newcomers to Evanston immediately made their presence felt. But Schroeder knows that what’s waiting for them in Ann Arbor won’t be anything like what they’ve dealt with before. The key, in his eyes, will be changing the perception of what fast means.

“What they thought was fast as a high school athlete is not as fast as what you’re going to see at Big Tens,” Schroeder said. “You can’t be intimidated by that. You have to be excited by that fact that you’re in the same conference and you’re in the same pool as that level of an athlete. You’ve got to try and raise your game to equal those guys or be competitive with them.”