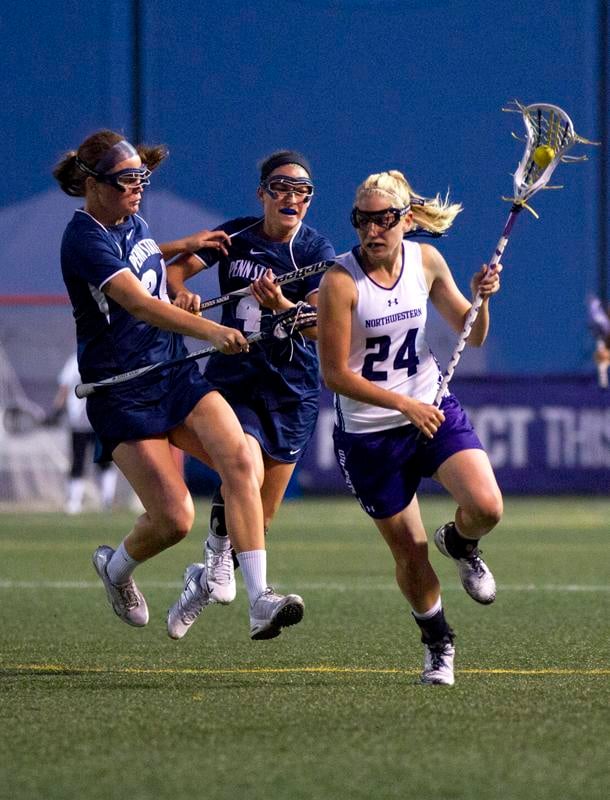 Senior midfielder Christy Turner evades defenders on a breakaway. Turner was one of 15 players to score against Marquette in Northwestern’s first home game of the season, a 20-5 romp over the Golden Eagles.

Appropriate to the game’s indoor setting, Northwestern brought the heat Tuesday against Marquette.

Although NU didn’t get to have their home opener at Lakeside Field, the Golden Eagles proved to be no problem for the No. 4 Wildcats, who played host from an indoor facility in Lake Barrington, Ill. NU trounced the two-year-old Marquette program, 20-5.

“It was weird. It was nice that we got to be inside,” said senior attack Alyssa Leonard. “I wish we could’ve been at Lakeside. It’s kind of nice to have our home crowd, all of our friends there, but there’s nothing you can do. And you have to do what you have to do with the weather and can’t control that.”

An early lead – the Cats were up 12-2 at halftime – meant NU got to rotate through its roster and put new players, from senior midfielder Caroline Gersuk to freshman goalkeeper Natalee Easthom, on the field.

“It was really exciting to get the whole group in,” coach Kelly Amonte Hiller said. “It was tough the first couple games because we had a lot of players who were competing and playing really well and maybe didn’t necessarily get their opportunity, and I think they got their opportunity today. I think top to bottom the girls did a great job.”

NU took the game by its largest margin of victory since April 24, 2010. The Cats overwhelmed the Golden Eagles from the opening whistle and were up 5-0 within the first eight minutes. NU took more than triple the shots Marquette took, gathered 10 more ground balls and grabbed 15 more draw controls (21 compared to the road team’s six).

That dominance extended to the Cats’ cage. NU used three goalies, who combined for three saves, and the defense made 15 of its 16 clears.

Mupo, a redshirt junior who started three games last year before an injury forced her to sit for the rest of the season, accounted for two of the team’s six assists.

Amonte Hiller praised the junior for her decision making on offense.

“I think the last couple years have been tough. … So I think for her, she’s coming into her own, get a lot of confidence, and she was just really great on the offensive end,” said Amonte Hiller. “Very unselfish, shared the ball very well, moved it and was aggressive herself.”

Both Amonte Hiller and Leonard were pleased with the Cats’ win-by-committee effort, as one of the team’s goals this year is to increase general team support as well as individual preparedness.

In short, the team is holding everyone responsible this season.

“I think we’re taking a holistic approach to it. We’re really trying to gel as a team and have a lot of weapons from top to bottom,” Amonte Hiller said. “Anyone can come off the bench and make an impact.”

The Cats are scheduled to host Notre Dame on March 5, though due to weather, if the game will be on Lakeside Field or at the Lake Barrington facility is undecided.