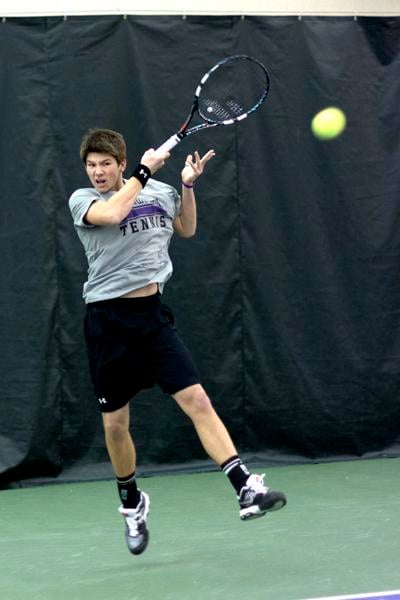 Freshman Strong Kirchheimer, who played the No. 4 singles spot in a 4-3 loss against Harvard on Friday, returns his opponent’s shot. Kirchheimer’s loss in a three-set tiebreaker was the last match in a quick succession of singles losses for the Wildcats.

If there was one word to describe Northwestern’s match against Harvard, it was obvious: heartbreak.

Taking lessons from the football team, the No. 29 Wildcats dropped an unimaginably close 4-3 match to the No. 24 Crimson in Boston on Friday. The road squad only lost when freshman Strong Kirchheimer, playing in the match’s final singles contest, fell in a tiebreaker in the third and deciding set.

That was directly after freshman Alp Horoz lost his own singles match. Needless to say, the loss wasn’t easy to swallow.

“It was very tough,” sophomore Mihir Kumar said. “Basically what happened is I won, Alp lost, then Strong lost within two or three minutes. It was a really quick ending and it was brutal.”

And to top it off, NU had led 2-0 in the match. As coach Arvid Swan noted after the Middle Tennessee State contest, his squad was unlikely to get off to an exceptionally sluggish start two matches in a row. That proved correct when the Cats took the opening doubles point, mostly thanks to Kumar and senior Raleigh Smith, who upset the No. 14 doubles team in the country.

Freshman Sam Shropshire added the second point when he won his singles match. But after that, Harvard won four of the next five points, two of them in three-set battles, to take the contest.

But the Cats had short memories. Returning home to the Combe Tennis Center on Sunday, NU faced off with No. 27 North Carolina State and promptly fell into an 0-2 hole. Behind against an elite squad and with a devastating loss still lingering, the rest of the match seemed likely to lead to a comfortable Wolfpack victory.

Then Swan decided to have a little chat with his squad.

“Well, we had a nice motivational speech from Arvid,” Shropshire said. “That definitely fired us up a bit and it helped us wake up. It was what we needed.”

Instead of a solid road victory, N.C. State never won another point. The Cats captured the final five singles, with No. 111 Smith defeating No. 33 Austin Powell in three sets and NU efficiently attacking the Wolfpack’s weak spots, their Nos. 2-4 singles.

In that area, Shropshire, Kumar and Kirchheimer all won their matches, two of them in straight sets. In a match that once seemed dire, the Cats came out on top, 5-2.

Apparently that strategy worked. The home squad swept the first 4 points and came away with a 6-1 victory.

Even after such a thorough defeat, the team still felt the Crusaders offered formidable opposition.

“They’re a very good team,” Kumar said. “They have some really good freshmen and their coach has done a great job putting that team together. For our second match of the day, it’s tough, and for us to come out and battle like that, it was a really good win. It showed a lot of grit and heart from us.”

The Cats will have one more match before they commence Big Ten play, but this past three-day slate was the last prolonged action the team will see before conference competition.

NU is 10-4 at this point and may be in the top 25 when the newest rankings come out. The squad has prided itself on scheduling difficult competition, which bodes well for play in the Big Ten, where every team but Iowa is ranked.

The Cats aren’t looking past their final non-conference opponent, No. 48 Louisville, but they see good things ahead for Big Ten play.

“We’re definitely ready,” Shropshire said. “We’ve had a lot of good matches leading up to it and everyone is feeling good and is pretty healthy. So, we’ll be good heading into conference play.”