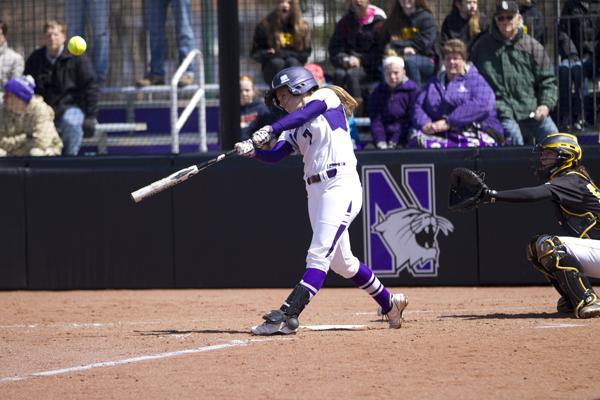 Junior Anna Edwards sends a ball into left field. Edwards nailed a 3-run home run in the fifth inning of Northwestern’s 4-2 win over No. 3 Washington on Friday.

Northwestern competed in its third preseason tournament of the season over the weekend, this time traveling to Cathedral City, Calif., to participate in the Mary Nutter Classic.

The Wildcats put on another impressive performance, finishing 3-2 in the tournament against some of the country’s top teams. The opening game for the Cats — in which they bested No. 3 Washington 4-2 — was a highlight.

Later Friday night, NU suffered an 11-9 loss to No. 18 Oklahoma. Saturday served the Cats a better fate: a 4-2 win against San Diego State and a 14-1 victory against LIU Brooklyn. Finally, NU closed the weekend with a tough 4-0 loss to No. 15 Baylor.

Senior Sammy Albanese pitched the full seven innings for NU against Washington in spectacular fashion, striking out five and allowing only four hits against the highly ranked Huskies.

Albanese agreed that the defense came through behind her to give her confidence in executing against Washington.

“My goal was just to keep them off-balance,” she said. “I had great defense behind me. I wasn’t afraid to attack the zone and let them put the ball in play because I knew the defense would make the play.”

Defense wasn’t the only story for the Cats in their underdog victory, junior Anna Edwards blasted a 3-run home run in the fifth inning to give the Cats a 4-1 lead that they wouldn’t relinquish.

Though NU’s offensive prowess continued, putting up nine runs against No. 18 Oklahoma, that proved not to be enough as the Sooners snagged a 2-run victory.

“We started well. We had command and we gave it away,” Drohan said. “It’s nice to see us score so many runs, but we need to be able to hold on.”

The Cats led 9-3 at the end of the fifth, but the Sooners showed why they are considered one of the best in the country by battling back, knocking in 6 runs in the sixth to tie it up and another 2 in the seventh for the victory.

However, the Cats bounced back in the next two contests, besting San Diego State and later LIU Brooklyn in a five-inning, run-rule victory.

NU’s offense has been prolific this season, scoring twice as much as their opponents and batting .340 as a team.

“We’re doing a lot of good things,” Drohan said about the offense. “We have great power and are doing a really good job in our running game who batted .545 in the tournament said the offense is really clicking for the Cats.

“We’re really consistent throughout the whole order. We have a great mix of slappers and power hitters,” she said. “It’s not about our long game like it was last year. It’s about getting those base hits and putting the ball in play the whole time.”

Though the Cats’ offense will be one of their key assists for the foreseeable future, NU was unable to convert against Baylor in their final game of the tournament.

In the Cats’ Sunday contest, the defense faltered and allowed the Bears to tally 3 unearned runs.

“We faced a good team in Baylor,” Drohan said. “But we gave them too much defensively.”

Overall, the Cats appear confident heading into their next preseason tournament, this time in Fullerton, Calif., and are taking away positives from the weekend as well as focusing on what needs improvement.

“We’ve had a lot of challenges early in the season,” Drohan said. “We’ve seen a lot of ranked teams, but we have the confidence to compete with them and beat them.”