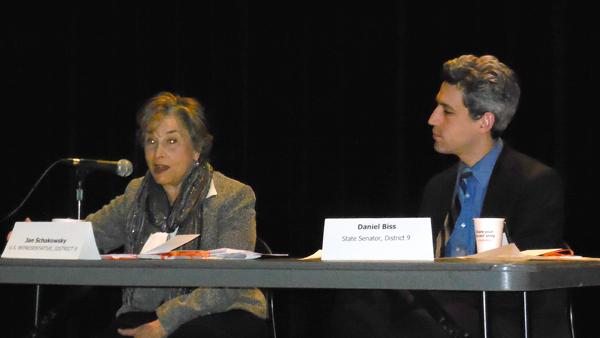 A community health care provider hosted a town hall meeting Friday morning as part of an effort to increase dialogue between politicians and community members about mental health issues.

Turning Point, the Skokie-based mental health center, held its 13th annual meeting at the Skokie Public Library, 5215 Oakton Street. The meeting featured local and national politicians, including state Sen. Daniel Biss (D-Evanston), state Rep. Robyn Gabel (D-Evanston) and U.S. Rep. Jan Schakowsky (D-Ill.), and drew about 100 people. The center gathered questions from its staff and community members to pose to the panel. The organization boasts an innovative “Living Room,” a low-cost alternative to emergency rooms for mental health crises, as part of its larger mission to address such issues in the community.

Biss stressed the importance of individuals telling their stories to their political representatives, recalling the letters he’s received from Turning Point residents.

He emphasized it only takes a few people to come forward to spark legislative action.

Gabel also mentioned how important it is for organizations to work together to make changes.

“It’s amazing what people at the grassroots level can do to change society,” Gabel said.

Recently, citizens have been using “Twitter bombs,” in which organizations post similar messages the same day with the same hashtag to attract attention from politicians, Schakowsky added.

One example of an issue that was of particular importance to the panelists was improving the criminal justice system to make it more equitable. Schakowsky raised the point that prison is “the number one place” for mental health disorders.

Biss said focusing on reforming the criminal justice system is important, especially to the people present in the room.

Illinois needs to be “smart, effective and humane in thinking about our criminal justice system,” Biss said. “This is a case where we can do a lot more and spend a lot less money.”

The panelists also discussed having equality in coverage of both physical and mental health services.

Schakowsky encouraged the crowd to visit healthcare.gov if they were not covered yet or to meet with one of the health care navigators at Erie to enroll in health care.

Doing this, she said, “can change your life.”