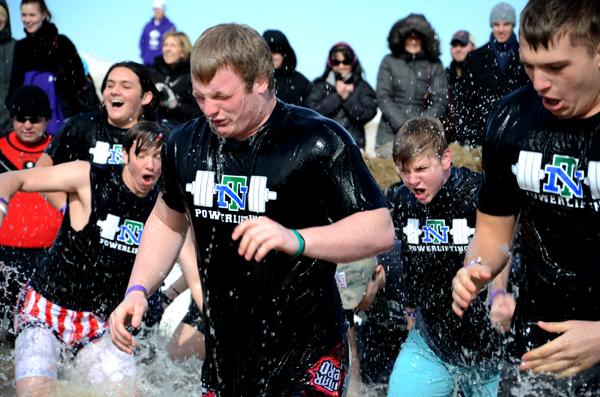 The New Trier Powerlifting Club team runs out of the water Saturday at the Polar Plunge in Evanston. The event’s North Beach participants raised a total of more than $260,000.

The Law Enforcement Torch Run Polar Plunge was part of a 30-day event from Feb. 21 to March 23. About 350 people entered a pool of water adjacent to the lake on Friday and Saturday, said area director Katie Grisham. The plunge at North Beach was the first event of the series. The fundraiser included 43 SUPER Plunger participants, who immersed themselves once an hour for 24 hours. Each participant had to raise at least $75 and received a sweatshirt, a lunch and an invitation to the after-party.

The plunge raised more than $260,000, according to a statement from the organizers.

Johnson, who has been working with the Northwestern location’s plunge for six years, said the event had a great mix of new and veteran participants.

“There’s a little bit of everything … that anxiety until you get your first plunge under your belt,” Johnson said. “A lot of excitement.”

One new participant came dressed in a Santa Claus costume. Kevin Hartwig, a teacher with the Northern Suburban Special Education District, said he heard that costumes were encouraged, had the suit and figured he would wear it. He plunged with a group of his colleagues.

“It’s a field that I work in,” Hartwig said. “It’s important to me, and a good thing for me to do with my coworkers to help us bond. It’s a good fun event.”

Participant Penny Vickas said it was her second time taking the plunge. She participated the year before last, and said this plunge was “a blast.” Vickas said part of her motivation for her plunge was her sister, who cannot do the plunge herself, and her lifelong neighbor.

Miranda Fenzau, winner of Miss Illinois Teen USA 2014, also was in attendance and made the plunge holding her sash.

In addition to the plunge, participants had the opportunity to dress in costumes and participate in a costume contest that took place prior to the 1 p.m. plunge. Some of the groups that decided to participate were U.S. Bank, dressed as superheroes, and Tutu Sassy, a group of three women wearing tutus and shirts with their group name.

A number of other plunges occurred on Saturday in the Illinois cities of Bloomington, Carbondale, Carlyle and Quincy. At least 13 more will take place in March.