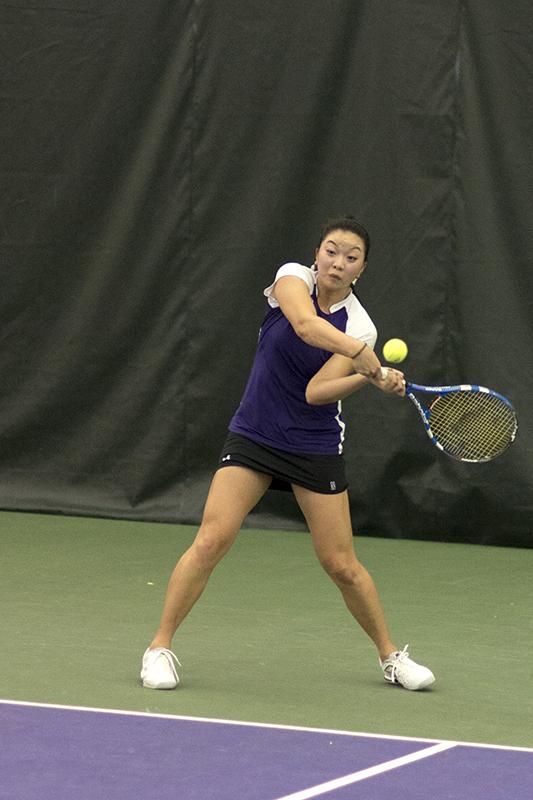 What a way to kick off conference play.

No. 8 Northwestern handed Indiana its first home loss of the season Thursday, 7-0. The Wildcats cruised through the doubles point and kept trucking through singles’ play, in which three players needed three sets to get the job done.

“Overall the atmosphere was really nice for doubles. We wanted to come out and start with a bang, which we did,” Corning said. “We just showed good energy and played right through it. ”

Coach Claire Pollard was pleased the Cats were able to execute their serves against the Hoosiers – the team had been focusing on serving better since its loss against Vanderbilt on Feb. 2.

On Thursday, serves were key to getting NU off on the right foot.

“We served well at (No. 1 singles) and returned well at 1,” Pollard said. “We played a lot of first set points, got off to a quick start and really just never let them in the match.”

In singles, No. 58 senior Belinda Niu played one of the strongest singles contests of the match to beat No. 93 Chupa 6-1, 6-4 and notch NU’s second point. Niu improved her singles record to 15-3 on the season, a high bar to set for some of the Cats’ less experienced players.

Pollard said in addition to her stellar play on the court, attitude makes up a large part of Niu’s leadership abilities.

“You know she’s just competing incredibly ferociously. She’s showing a lot of passion and intensity out there, setting the tone for the team,” Pollard said. “It’s motivating to watch it, it’s motivating to be around it, and she sets a great example for our younger players.”

Two of Niu’s classmates followed suit in their singles matches. Hamilton finished her singles match just minutes after Niu’s and with just as strong of an effort, putting away her opponent 6-3, 6-0.

No. 30 Corning followed up Niu and Hamilton’s contests with the first win in three sets of the day against No. 65 Katie Klyczek. Corning played what Pollard called a “flawless” first set but dropped her second 4-6.

“(My opponent) wasn’t making as many balls as she usually would, so the first set was kind of a cruiser,” Corning said. “In the second set she stepped it up a bit – she making more balls, making me play that one more ball, and I wasn’t executing as well. … It kind of caught me off guard.”

Corning was able to refocus to pull her third set out 6-3 and seal the match for the Cats.

Now, after traveling for two straight weekends, Pollard said her team will take a hard-earned four-day break. Corning is looking forward to the pause in the Cats’ busy schedule before the team takes on its second conference opponent in Purdue, at home March 1.

“We’ve had a long stretch of matches. And I know we all have a lot of work to catch up on, so a lot of rest of needed,” Corning said. “It’ll be really beneficial.”