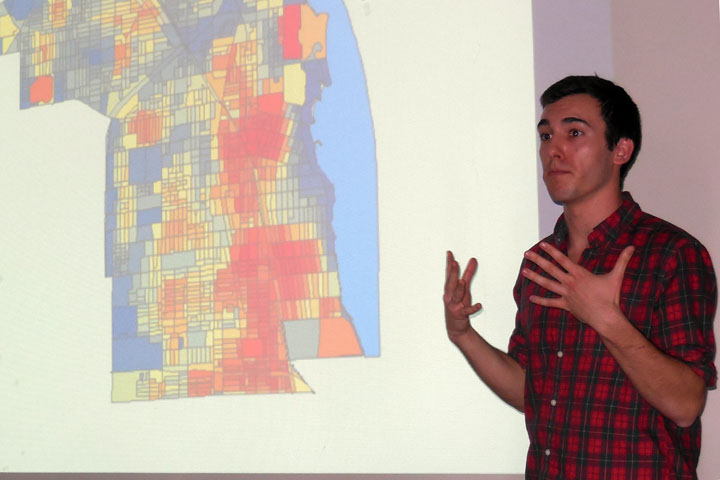 McCormick senior Graeme Murphy presents a map of Evanston based on population and employment density. The dark red areas are considered the most dense, which was taken into consideration when they planned possible Divvy bike stops for the future.

The Chicago Department of Transportation announced in November its plans to expand the city’s bike-sharing program into the suburbs.

The McCormick seniors researched models on bike-sharing programs in Chicago, Barcelona and Arlington, Va. They said they mostly considered population and employment density as well as transportation stops.

Hoping to learn more about the most logical placements of the future bike sharing stops, the students were soliciting community feedback about the placement of the Divvy stations in Evanston.

“We wanted to get community input about some of the data models we have,” McCormick senior Julie Sierks said.

The students presented four different models, three of which focused on different areas of Evanston, including north, south and southwest Evanston. The model which focused on the city as a whole got the most positive feedback from the residents in attendance.

Ald. Jane Grover (7th) suggested they place one station near Church Street and Dodge Avenue because it would be close to Evanston Township High School as well as one station close to Saint Francis Hospital, a large employer.

Other stop locations proposed by the students included ones by Technological Institute, the Davis Street Metra station and NorthShore Evanston Hospital.

Another prime location for a Divvy stop would be near the lakefront. The students said their research on Chicago’s bike-sharing program showed data indicating locations near the lakefront are among the most highly used.

Despite Divvy’s supplier having gone bankrupt in January, Catherine Hurley, the city’s sustainable programs coordinator, assured attendees the city is “not expecting it to have any impact on the project.”

If CDOT’s grant for Divvy’s expansion is approved, the expansion should happen sometime this year.

All the stations were proposed based on data derived from software that created heat maps of the different high population and employment density areas showing “hot spots” for optimal Divvy locations.