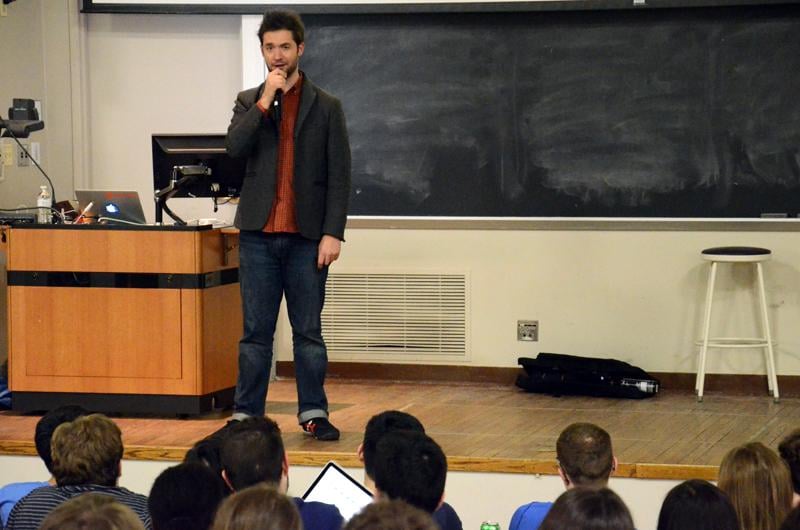 Alexis Ohanian, cofounder of Reddit, speaks at Fisk Hall on Wednesday evening as part of his Without Their Permission book tour. Ohanian talked about founding Reddit, how to be a successful entrepreneur and the importance of the internet.

The 30-year-old is on a 200-stop bus tour to promote his book, “Without Their Permission,” which the book’s website bills as Ohanian’s “personal guidebook as to how other aspiring entrepreneurs can follow in his footsteps.”

Ohanian said that the best way to get started as an entrepreneur is by creating, even if you face the risk of failure.

“Take chances by launching things, by creating things, by doing things because ultimately, the downside isn’t that bad,” he told The Daily before his talk.

Reddit, which Ohanian co-founded with Steve Huffman in 2005, is an online community where users vote on which stories and discussions they think are most important or interesting. The website, known colloquially as “the front page of the internet,” was acquired by Conde Nast in 2006. Although Ohanian is no longer involved in day-to-day activities, he continues to serve on Reddit’s board of directors.

During his speech, Ohanian asked if there was anyone in the audience proud of a project they were working on. McCormick sophomore Nikhil Pai shared his project, a wristband GPS device that vibrates when it is time for the next step on your route.

Ohanian commended Pai and reinforced the idea that aspiring entrepreneurs should get involved as soon as possible.

“Innovation is not limited to a zip code in Silicon Valley,” he said. “This stuff is happening right now.”

He also applauded those in the audience who know how to code and encouraged those who didn’t to learn.

“Those of us who can write code are not just exploring this new frontier, you are creating it under our feet,” he said. “You are building the platforms that will empower the rest of us.”

“I thought it was reaffirming in terms of the skills that I am learning, in terms of their importance to the modern economy,” he said. “Hearing people’s successes is always a great motivation to continue learning and getting better at programming.”

After Ohanian’s 30-minute speech, he was joined on stage by Kathrina Manalac (Communication ’07), the director of outreach for Y Combinator, a startup funding company which invested in Reddit in 2005, and Mike McGee (Communication ’10), who co-founded The Starter League, which teaches coding. Ohanian asked for their advice to aspiring entrepreneurs.

“How I got started was just to start,” McGee said. “I wanted to solve problems for other people.”

Manalac, who previously worked for Google and Samsung, compared her time working at smaller companies to working at larger ones.

“Google was an awesome place,” she said. “But, I felt like I was just a cog in a huge, huge machine that was already chugging along. … I wanted to be at a place that was smaller where I would have a greater impact.”

Like Reddit, Ohanian’s speech was filled with references to memes, many of which he compared to entrepreneurship. He used the Grumpy Cat meme to inspire students not to worry about what others in the field are doing.

“Grumpy Cat has more competition every day than we will have our entire lives,” he said. “Grumpy has to be better than every cat on the Internet. Think about that. Do you think Grumpy Cat wakes up every morning and thinks about his competition? No!”