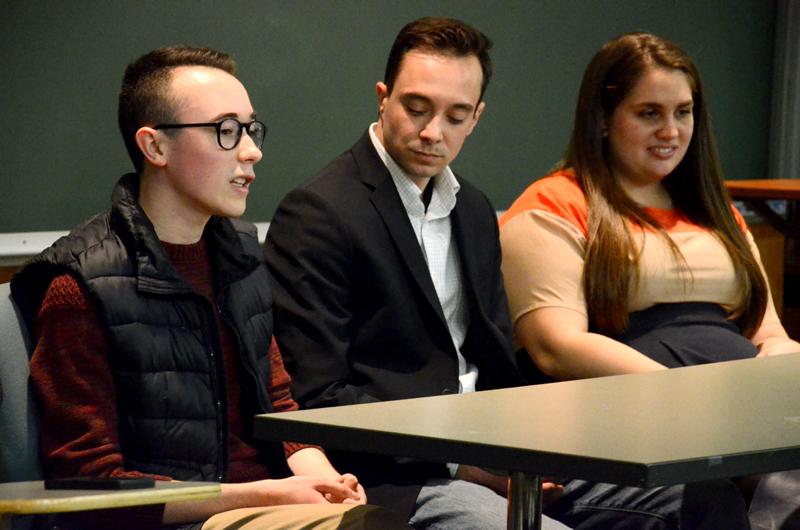 Medill sophomore Ryan Daggs talks about his experiences with Mormonism at the Book of Mormon Northwestern Panel Wednesday night in Annenberg Hall. Gordon Demery, a graduate student at The Chicago School of Professional Psychology, and Weinberg senior Marisa Prasse also served as panelists.

The Northwestern Latter-day Saints Student Association hosted a panel Wednesday about the Broadway musical “The Book of Mormon” and public misconceptions concerning Mormonism.

The panel, which drew an audience of about 30, featured student members of the association, as well as others involved in the Church and Jacob Judd, a coordinator for Mormon education in the Chicago area.

“What makes the musical so entertaining is that there’s some truth behind it,” Judd said. “But what truth are they getting at, and what makes it so interesting?”

Before opening the panel to questions, Judd explained the differences between the doctrine and the principles of the church. Judd said while all church members are expected to abide by certain rules, it is up to individuals to decide how they will apply them to their everyday lives.

Panelist Marisa Prasse, a Weinberg senior, said members of the church believe not only the Bible to be true, but also the Book of Mormon, a sacred text translated by the founder of LDS, Joseph Smith.

One of the panelists, Medill sophomore Ryan Daggs, described his recent conversion to Mormonism as a gradual process. Although Daggs’ parents were members of the church, they were not very active, and it wasn’t until he was about to go to college that he became interested in the faith.

“It wasn’t like a light bulb went off, and all of the sudden I became a Mormon,” Daggs said. “I really came to enjoy reading the Book of Mormon because it had a lot of the similar stories and similar accounts that I had read in the Bible.”

Daggs is currently preparing to serve as a missionary for two years for the church. Panelist Gordon Demery, a graduate student at The Chicago School of Professional Psychology, served his mission in Uganda, the same country parodied in the musical. Demery said he found himself confronted with questions about his faith.

However, he said one of the main reasons he is a member of the church is the amount of freedom he is given to exercise his faith. He dispelled the idea of a lack of agency within Mormonism that is perpetuated in the musical.

“I think really what it boils down to is a personal choice, and for me that’s what I really respected,” he said. “There were times that choices were made based on trust, but I was never asked to give up my personal choice.”

Medill senior Jane Kim said she attended the panel to understand more about her own faith.

“I grew up in an Evangelical Christian church,” Kim said. “I’m in the process right now to intellectually see the differences between my faith and others doctrinally.”

When asked about why he chose Mormonsim, Daggs said it was an easy choice.

“The blessings that have come to me since joining the church have definitely cemented the fact that becoming a member was the right choice for me,” he said.

Correction: A previous version of this story misstated Joseph Smith’s role in translating the Book of Mormon. The story also misstated the requirement of missions within the church. The Daily regrets the errors.