Wrestling: Northwestern to say goodbye to 3 on Senior Day against Stanford 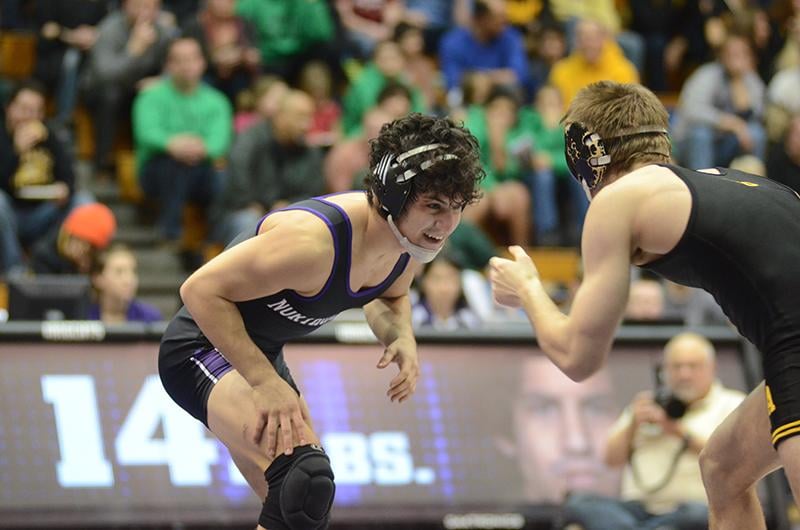 Junior Pat Greco takes on his Iowa opponent. Greco will be honored in Sunday’s Senior Day celebration, as he is graduating this spring to enroll in law school.

No. 23 Northwestern (6-7, 1-7 Big Ten) concludes its home season Sunday against No. 22 Stanford (17-4) in what junior heavyweight Mike McMullan called a “Battle of the Brains.”

The Wildcats will honor seniors Kevin Bialka and David Helmer, as well as junior Pat Greco, who graduates this spring to start law school at DePaul next year.

Coach Drew Pariano said Senior Day is always a sad one, but this year’s will be especially sad watching Greco leave early. Greco said his early departure will be bittersweet.

Last season, the junior won a starting spot and qualified for the NCAA Tournament. This season, he is once again working to capture a postseason berth.

“You can never have enough Pat Grecos on your team,” Pariano said. “I don’t want to see him go. I joke with him that I’ve already called the (law) schools he’s applied to and told them he decided to defer.”

Pariano also reflected on Greco’s growth as a wrestler this season.

“If he makes a mistake out there, he has grown to the point where he does not get frazzled,” Pariano said. “He moves on and adjusts.”

The season has been a roller coaster for Greco, who sports a 6-7 record in dual meets. Greco began the season 4-0 but has dropped his last six matches, with three of those decided by only a point.

Bialka and Helmer both had careers derailed by injuries. The two seniors own a modest 40-55 combined record.

Nonetheless, Pariano said the team’s most veteran members made great additions to the program from a morale standpoint.

“David and Kevin are the consummate teammates,” Greco said. “Their injuries kept them from making progress, but they never held that against anyone or felt sorry for themselves. They’ll do anything for any of us. They both still work really hard to this day even though they might not ever see the fruits of that.”

The Cats’ hands will be full once again Sunday as they try to snap a six-match losing streak. The Cardinal is their eighth-straight nationally ranked opponent.

Stanford is strong in the lighter weight classes, with top-15 wrestlers at 125 and 133 pounds, which is bad news for NU.

Those classes are an area where the Cats have struggled recently. Sophomores Garrison White and Dominick Malone have compiled an 0-10 record in the last five duals. Pariano said he hopes White and Malone can build confidence before heading to the Big Ten Tournament.

“This is the perfect time of year to knock off a ranked guy because it stays in people’s minds,” Pariano said.

The Cats will also send McMullan, the nation’s No. 1 heavyweight, to the mat in search of his seventh straight victory. Pariano said McMullan has stayed “level-headed” since earning the No. 1 ranking.

“It’s nice to have that honor,” McMullan said. “But at the end of the day you haven’t actually won anything except some personal gratification.”