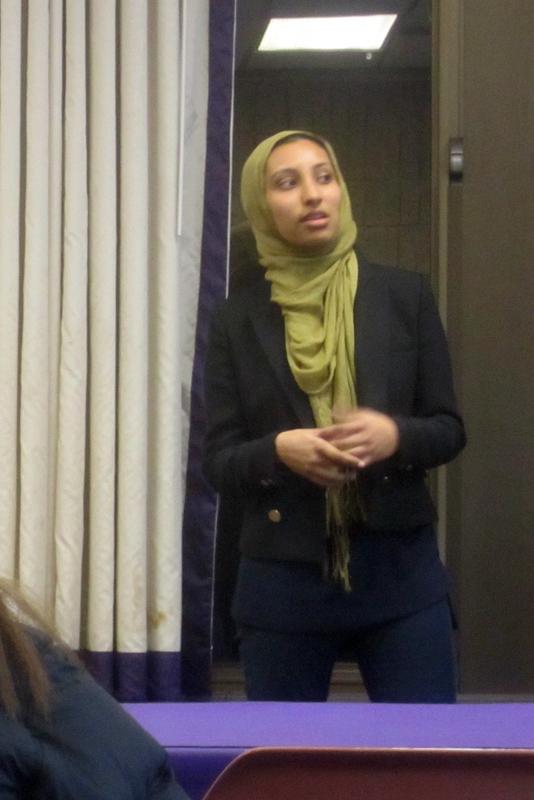 Sofia Sami, Associated Student Government academic vice president, discusses her proposed legislation at Wednesday’s Senate meeting. If approved, the University Student Advisory Board would be added to the ASG code.

The new position, vice president of student activities, will be discussed at an open forum meeting next week, and the Senate will vote on it Feb. 26. As a result, the release of applications for financial vice president and vice president for student groups has been delayed until Feb. 26 in order to accommodate the possibility of a new position.

Currently, $1.3 million is designated through the ASG Activity Fee for student clubs. Many student clubs, however, continue to raise concerns about lack of financial support, ASG speaker Katie Funderburg told The Daily after the meeting.

“Hopefully, if the new position is created, (the appointee) will have more time to look into alternative solutions … and can look into some of their concerns,” the Weinberg senior said.

Seven members of the ASG Executive Board authored the legislation.

RCB senators Isaac Rappoport and Lauren Thomas also introduced resolutions backing bankruptcy protection for students and an end to sequester cuts for higher education institutions. Student loan debts do not have the same amount of consumer protections as other types of debt, the Weinberg freshmen noted during their presentation. Rappoport and Thomas also discussed lending ASG support for a resolution that promotes expanding access to information on different types of loans and lowering barriers to obtain low-interest state loans.

In addition, ASG passed a bill backing the transgender community.

“Trans is a minority within a minority and a frequently marginalized group,” said Petros Karahalios, Rainbow Alliance senator and a Weinberg junior. “This is a good time to introduce something like this.”

At the beginning of the meeting, Robert Donahue, associate director for Center for Civic Engagement, discussed NU in Chicago, which will feature behind-the-scenes trips in Chicago.

Student’s from school’s chapter of the Posse Foundation, which sent 10 students to NU this year, talked about a retreat in April during which students will talk about the intersection of social reform and the advent of technology. Jourdan Dorrell, a Weinberg freshman and Posse Scholar, said the students strive to promote campus-wide discussions and make NU more welcoming.

Lesley-Ann Brown, director of campus inclusion and community, said the timing of the retreat at the beginning of next quarter would allow students to participate without worrying about midterms.

“It’s a great opportunity to have a time you all get away from campus,” Brown said. “(You) have an opportunity to engage in community in a way that a lot of students really haven’t been able to have at Northwestern yet.”