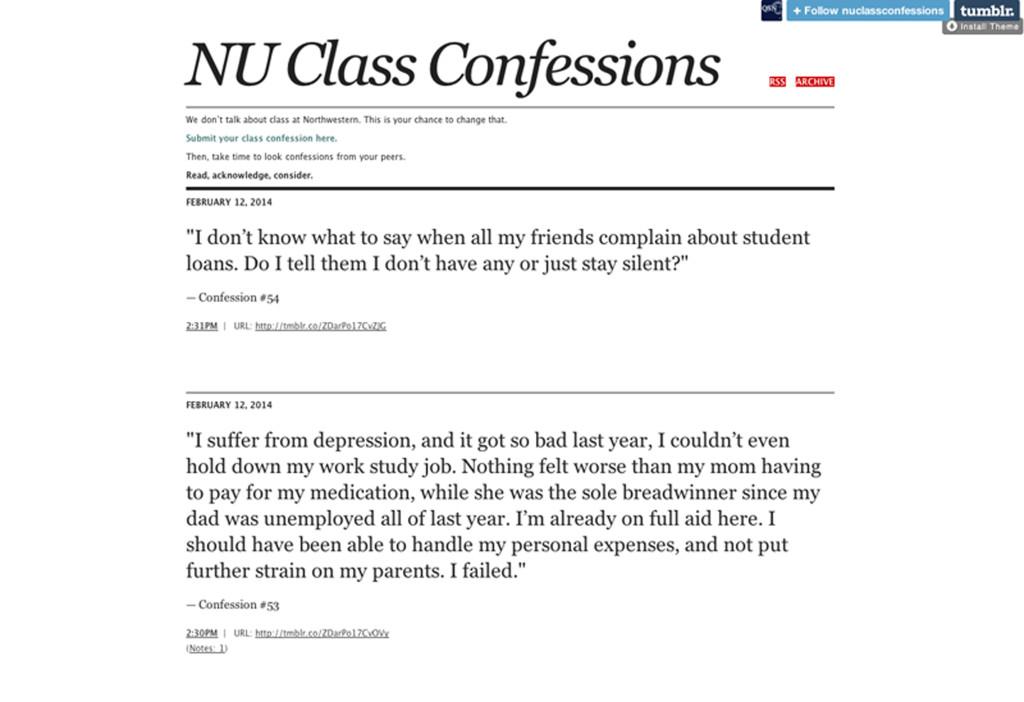 Northwestern Quest Scholars set up a website Wednesday where students can anonymously submit confessions about socioeconomic status. Students’ confessions will be on display in Norris from Feb. 17–22 in an attempt to encourage discussion about class at NU.

In an effort to promote campus-wide dialogue on class and identity, Northwestern Quest Scholars launched “NU Class Confessions” on Wednesday, a website where students can anonymously share their experiences with different economic backgrounds.

The website, which was inspired by similar projects at Stanford University and the University of Chicago, is a precursor to Quest Scholars’ “Money Matters,” a week of programming beginning Monday devoted to issues of economic differences. NU’s chapter of Quest Scholars works to advocate and provide a community for low-income students.

“The most striking thing about the page is you see a lot of guilt,” said Erin Turner, the social chair of NU’s chapter of Quest Scholars. “You see guilt from people of all backgrounds. The guilt is directed toward parents, peers, themselves. This guilt can be incredibly destructive and really multiply the stress of students.”

Submissions to the website opened in the afternoon, and as of Wednesday night, there were more than 225 posts, said Turner, a SESP senior.

One of the anonymous posts on the website reads, “I have a full ride at Northwestern because my family is not able to pay a single penny. I work three jobs so that I can eat, sleep, and socialize like the rest of my friends. It breaks my heart whenever I go home because my family still sleeps in a cold bedroom, doesn’t buy Christmas presents, and doesn’t eat anything other than groceries purchased with food stamps or an occasional trip to McDonald’s.”

Weinberg senior Alex Glancy said the website shows that everyone, regardless of their financial background, has something to hide.

“I think it is perhaps helping people see that they are not alone,” she said. “I think it’s great that people are talking about these issues more, but I hope it doesn’t stop at awareness.”

Daniel Flores, the founder and co-president of NU’s chapter of Quest Scholars, said “Money Matters” was created because conversation about class is lacking on campus. He said 14 percent of NU students are low-income, and others depend on loans to finance their education.

“This isn’t just our issue,” the Communication senior said. “This is everyone’s issue. The ‘One Northwestern’ experience isn’t quite the same across the socioeconomic spectrum.”

“Money Matters” events will include a fireside chat with University President Morton Schapiro on Monday and a keynote address next Thursday from Alfred Lubrano (Medill ’80), the author of “Limbo: Blue-Collar Roots, White-Collar Dreams.”

Turner said she wanted to plan the week because she comes from a low-income family and didn’t feel comfortable talking about it until her sophomore year.

“It’s something that I’ve seen throughout my four years,” she said. “It’s my last chance to spark a dialogue that I feel has been missing.”