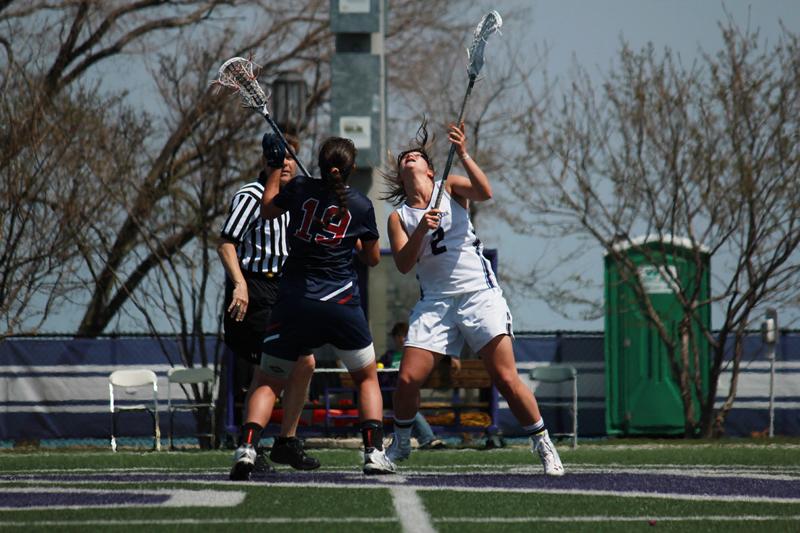 Senior draw specialist Alyssa Leonard reaches for the ball against Penn in last season’s Senior Day contest. Leonard pulled for 10 draw controls in Sunday’s season opener and now has the most career draw controls of any active Division I women’s player with 316.

Sunday’s game against Virginia marked the beginning of a new season, but featured the same old Northwestern.

In their first contest since coach Kelly Amonte Hiller received a contract extension through 2021, the No. 4 Wildcats (1-0) beat the No. 8 Cavaliers (0-1) 13-12 in Atlanta, taking the lead for good on an 8-meter goal from senior attack Kate Macdonald with 17 seconds left in the game.

The Cats played a back-and-forth contest en route to their eighth consecutive victory against one of their rivals and frequent NCAA Tournament opponents.The teams traded goals for the last 13 minutes of the first half and Macdonald’s shot broke a seven-minute drought that had the teams tied at 12.

But aside from the contest’s thrilling final shot and Bianco’s standout performance, the game was par for the course for NU.

But NU is no stranger to moving on. Senior veterans such as Macdonald, draw control specialist Alyssa Leonard and defender Kerri Harrington, who saw plenty of playing time even while Thornton and Fitzgerald dominated headlines, led a Cats squad that produced fairly characteristic stats.

Leonard dominated the draw control with 10 possessions to help her team reach a total of 18 draw controls compared to Virginia’s nine. Leonard, who also netted two goals against the Cavaliers, now has 316 draws in her career, the most among active Division I women’s lacrosse players.

NU will travel south once again on Feb. 22 to face Duke on the Blue Devils’ turf. The Cats’ conference schedule is set to begin March 9 against Ohio State.