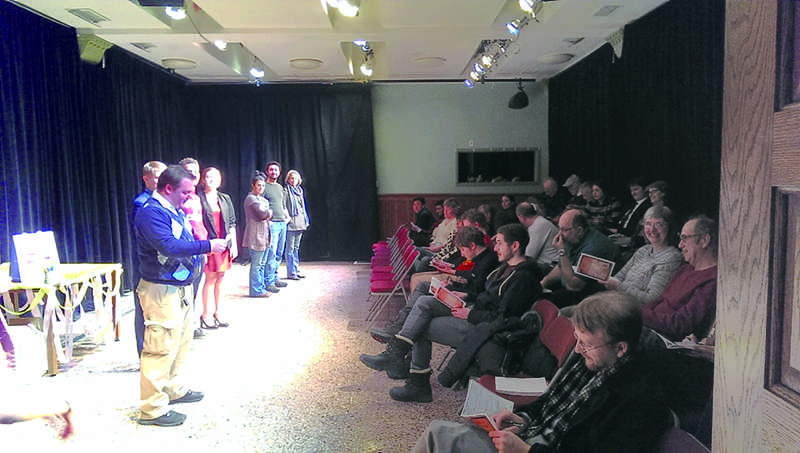 Audiences are voting for their favorite shows on opening night at the First Laugh festival. The festival kicked off Friday at the Piccolo Theatre in Evanston.

At the Piccolo Theatre in Evanston, life can be funny. First Laugh, a one-act comedy festival, kicked off its inaugural year Friday with the premieres of three short plays submitted by local playwrights.

The show was initially delayed due to a power outage that shut down the Purple and Yellow lines on the Chicago Transit Authority. A few actors as well as the light and sound technician were late after they were forced to take cabs, said Tony Lawry, creator and host of First Laugh.

“Life’s gonna throw comedy at us, so we’ll take it,” Lawry said.

So, with about 35 audience members in the intimate 50-seat theater, the show went on. The first play, “Laughter is Serious Business” by Zev Hurwich, focuses on a worried young father who calls in a child psychologist because his three-month-old son hasn’t laughed yet. Hurwich is a student at the University of Chicago, and the three-person cast was made up of area college students.

“It hasn’t been the same twice,” said UChicago third year Hannah Nyhart, who played the mother in “Laughter.” “It was really fun to work with.”

The minimal set included only five folding chairs, three of which were pushed together to create a couch.

The chairs were rearranged to create an improvised car for the next show, playwright John Green’s “Ice Flow.” Sitting in a car looking out on Lake Michigan in deep winter, an alcoholic sister opens up about a scarring experience, interspersed with jokes from her brother to relieve the tension. The audience went from roaring laughter to dead silence as the show lurched continuously between the two moods.

“I thought I was in for comedy, and then I got ‘Ice Flow,’” said Nate Ferguson who attended the show. “But then I was just ‘give me more of this.’” Ferguson, who will be acting in a First Laugh show next weekend, said he would like to see “Ice Flow” adapted to be a full-length play.

“A lot of my work revolves around how important relationships are in our lives,” Hilger said. “John’s play has a lot to do with how difficult it can be to connect through relationships and how transformative it can be when they’re successful.”

Audience energy spiked back up as a young woman ran screaming onstage to open Liz Calvert’s “Happy 3rd Birthday Siobhan,” the last show of the night about a birthday party gone horribly wrong. Smeared with icing, three young, suburban mothers huddle on top of a kitchen island, trying to figure out what to do about the murderous toddlers running around the house with steak knives.

“It’s too much TV,” one of the mothers sighs.

Director Erik Tylkowski, who lives in Chicago, said “Happy 3rd” was a parody of 1990s suburbia and the mothers who lived in it.

“The number-one thing was making sure we had mom hair,” Tylkowski said. “We looked at some 90s sitcoms.”

At the end of the night, audience members filled out a ballot voting for their favorite shows. The playwright with the most votes at the end of the festival will receive a $250 prize. Lawry, who is the director of education and outreach and is the rental manager at Piccolo, said he would also like to give them the opportunity to produce a full-length version of their play.

First Laugh continues next Friday and Saturday at 8 p.m. at 600 Main St. with three new plays, including the show Ferguson, a freshman at Loyola University Chicago, will be acting in.

“In comparison to everything today, it is way further on the absurd scale,” said Ferguson. “It is way more surreal.”