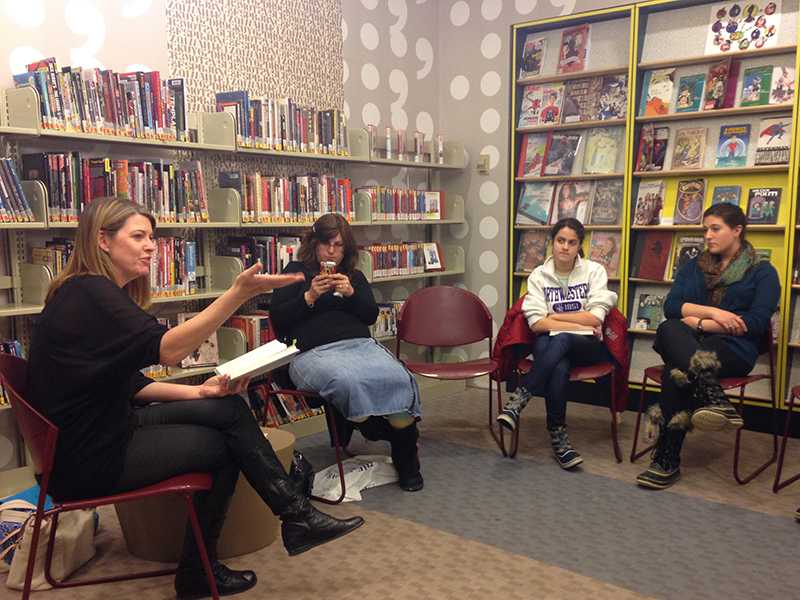 Tamara Ireland Stone speaks to an audience at The Loft in the Evanston Public Library. Her books, “Time Between Us” and “Time After Time,” both take place in Evanston.

Stone spoke to a group of teens in The Loft, a center for students in sixth to 12th grade, in the Evanston Public Library, 1703 Orrington Ave. Her two debut novels, “Time Between Us” and “Time After Time,” are companion stories about the relationship between Anna, who lives in Chicago in 1995, and Bennett, a man who lives in San Francisco in 2012 but has the ability to travel through space and time. The former novel is told from Anna’s perspective and the latter is told from Bennett’s.

“It’s really a story about two people who were never supposed to meet, but do and fall in love, even though they know that’s a really, really bad idea,” Stone said. “And they try to stay together even though time is constantly trying to knock him back where he belongs. It’s kind of like your ultimate long-distance relationship book.”

Stone, who was born in California’s Bay Area but lived in Evanston in her early adulthood, says the different places she’s lived throughout her life have influenced her storytelling. Stone said “Time Between Us” takes place in Evanston in 1995 because she lived there from 1995-1997.

“’We writers go into that, ‘write what you know,’ but I didn’t know anything but California,” she said. “But then I said to myself, actually, that’s not true. I know Evanston … so I thought that would be kind of a fun time travel experience of my own to go back to that place in my head and remember all those things about living in that town.”

Though she was initially on track to become a journalist, Stone ended up working in a Silicon Valley PR firm. Several years later, Stone decided to start a marketing communications firm of her own.

Then, one day, after an unexpected conversation with her husband, Stone said she finally found her story.

“One night my husband and I were hanging out in the kitchen, and he said, out of nowhere, ‘If you could have any super power, which one would you pick?’ And I was like, ‘Time travel, what else?’ I went to bed that night, and I just couldn’t get this idea out of my head. I thought, ‘There’s a story there.’”

Stone spent a year writing, editing and re-editing her first book, and finally it was picked up by a publisher. She then decided to create a two-book series, one serving as the beginning of the story and the other as the end.

“I wanted to tell a story more about what happens when you get to those key points in life when you make a decision and you go down a path,” Stone said. “What if you could go back to that point in your life and make a totally different decision?”

Renee Neumeier, the library’s young adult librarian supervisor, said the Teen Advisory Board chose “Time Between Us” as one of its top 10 books of 2013.

“It’s a great chance for teens to meet a national author, to ask her questions about the book,” Neumeier said. “There’s quite a few teens who checked out her book and really enjoyed it … It’s good for them to talk to a published author about the writing process.”