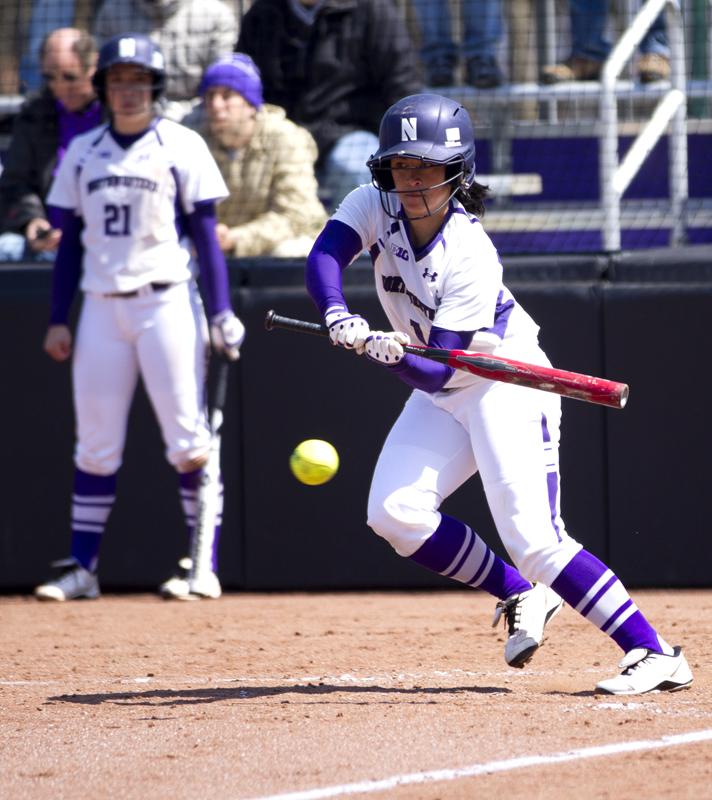 Senior Mari Majam, a veteran on a Northwestern squad that includes four freshmen and a transfer student, bunts. Majam said the young players have transitioned smoothly from their high school days and the team should be ready for its season opener this weekend in Tempe, Ariz.

After the 2013 season didn’t go as planned for Northwestern, the team is determined to fulfill expectations this time around.

With four incoming freshmen and a transfer student, the Wildcats’ lineup is, what senior catcher Paige Tonz calls “stacked.”

“The coaches have some decisions that are going to be hard to make,” Tonz said, referring to the number of weapons the Cats have on their roster for the upcoming season.

The depth of the roster is rounded out by seniors Mari Majam and Marisa Bast and juniors Andrea DiPrima and Anna Edwards, who will each look to build on success from last season.

“We have a lot of experience and this has allowed us to focus on more specific situations,” Majam said.

Majam said the disappointing ending to last year’s season has only sparked the team and increased determination and focus during the offseason.

“It didn’t end how we wanted it to,” Majam said. “It’s been really easy to stay focused and motivated. Instead of coming back and wanting to dwell, we put work and time in the fall and summer.”

Tonz also said the amount of experience that the team has this season has allowed the Cats to fine-tune small aspects they believe need work.

“We have practiced uncomfortable circumstances so that we are comfortable in uncomfortable situations,” she said. “We just want to be versatile and play well when things aren’t going well.”

As a catcher, Tonz has personally focused on the pitching staff and her relationship with each pitcher. NU has three returning pitchers in last year’s star, junior Amy Letourneau, senior Sammy Albanese and sophomore Kristen Wood as well as freshman Nicole Bond. Although the group graduated veteran pitcher Meghan Lamberth, Tonz has confidence in the returning staff and Bond.

“With (Wood’s) experience being on the team for a whole year, we are expecting big things from her,” Tonz said.

Tonz was also impressed with the way Bond pushed herself in the preseason. She has made “great strides,” the catcher said.

Bond isn’t the only incoming player to improve and make a smooth adjustment, Majam said.

“They are all very eager to learn, and that’s helpful,” she said, regarding the four incoming players. “Their nerves went away quickly, and this has allowed them to learn faster and understand the coaches’ style.”

Freshman outfielder Krista Williams attributed the smooth transition to the help of the seniors and experienced players.

“All the coaches and players have been very supportive and helpful,” she said.

An outfielder and a slapper, Williams has looked to similar players in seniors Emily Allard and Majam for their expertise and advice.

Heading into this weekend, in which NU will play their first tournament of the season, the Kajikawa Classic in Tempe, Ariz., the Cats open the tournament against No. 22 Stanford. The team is focused on playing one pitch at a time, a sentiment that has been preached the entire offseason.

“We want to play with intensity and be fun to watch,” Williams said.

As for big-picture goals, in her senior season Majam has high hopes for the experienced and well-rounded Cats.

“We want to win a Big Ten Championship,” she said. “And hopefully get to the World Series.”

Correction: A previous version of this article misstated the returning pitchers for the Northwestern softball team. Amy Letourneau is a returning junior pitcher. The Daily regrets the error.