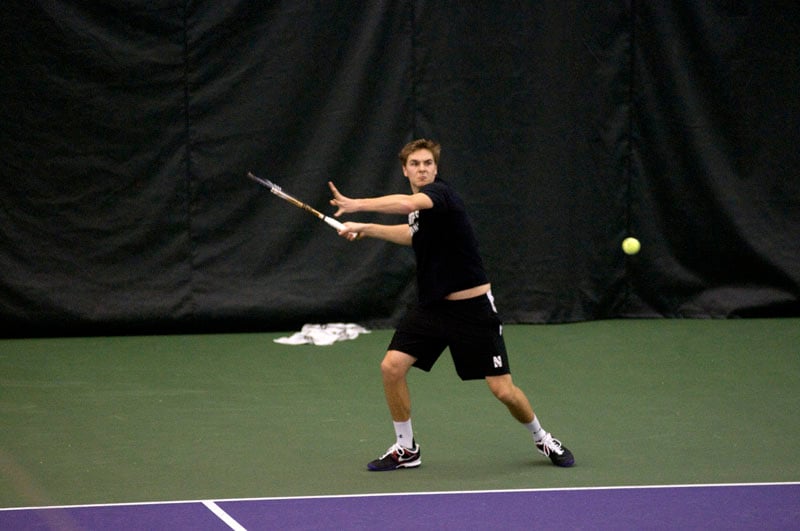 For Northwestern, a return home means a busy slate and no reprieve from formidable competition.

The Wildcats will host a trio of squads this weekend in Evanston starting on Friday with Rice and continuing with contests against Cornell and Western Illinois on Sunday.

At first glance, this appears to be a relaxing three-game stretch for the No. 30 squad following the team’s recent set of matches. Within the last two weeks, the Cats took on Tulsa, Oklahoma and Vanderbilt, all of whom were ranked in the top 25 at the time. Of the squads NU is set to face over the coming days, only Cornell is ranked, and the Big Red comes in at No. 62.

If Pat Fitzgerald ‘s famous mantra is “stats is for losers,” coach Arvid Swan has something similar to say regarding early-season rankings. When it comes to Rice and Cornell, Swan said, the rankings highly undervalue their talent.

“Rice and Cornell are as good as the previous teams we’ve played,” Swan said. “Rice and Cornell will both finish as NCAA tournament teams. At this point the rankings don’t matter at singles, doubles or even team results. They’re based on a coaches poll, for the most part it’s based on last year. Those teams are two quality teams I expect to be top 40, top 35 in the country at the end of the year.”

Maybe the Cats won’t have an easy time after all. NU is coming off a match where, by all accounts, the team did not bring its ‘A’ game.

It was still an effort that produced 2 points against a top-20 squad in Vanderbilt but clearly did not satisfy the Cats.

And they cannot allow similar issues to fester. Rice has no players who are nationally ranked in singles or doubles, but Swan still contends that the Owls have quality talent at the top. At the No. 2 spot, Tommy Bennett has looked impressive in dual-season singles action with a 4-2 start, including a win over Malte Stropp, the No. 39 singles player in the country — if that ranking can be trusted.

Rice also took LSU, a squad of NU’s caliber, down to the wire less than a month ago.

In other words, an Owls victory would not be a product of NU underestimating its opponent.

“We’re expecting a huge fight,” sophomore Fedor Baev said. “We know they’re a great team. We just need to prepare well this week, practice hard and work on the small things we did not do as well for this weekend.”

If fending off a fierce Rice squad wasn’t enough, the Cats also must deal with Cornell two days later. Swan’s contention that the Big Red is underranked is bolstered considering the team has been without its best player, Sam Fleck, for all but the first match of the winter season. Fleck anchors the team’s No. 1 singles spot when healthy along with making up half of the 40th-ranked doubles team in the nation. It is unclear whether Fleck will suit up Sunday.

On the Cats’ side, Sam Shropshire could be a key piece. The highly-touted freshman has a 3-1 singles record in duals play, mostly alternating between the No. 2 and 3 spots. His contribution may be vital if the matches are close, which is something he’s prepared for.

“I’ll be doing the usual stuff we’ve been focusing on, competing, the daily stuff we go through in practice,” Shropshire said. “I don’t have to worry too much about a letdown because we’ll put in a lot of work this week.”

The Cats’ final match, against Western Illinois, should be an easier challenge to end NU’s weekend. But, even at home, NU must bring its best effort to take down Rice and Cornell.